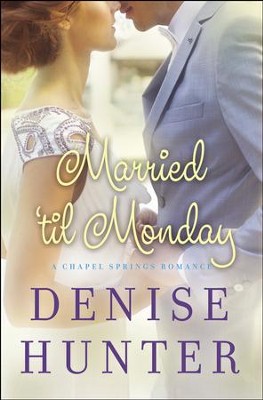 ▼▲
Ryan McKinley has tried to move on from his ex-wife, Abby. He's sulked, he's gotten angry, and ultimately he bought her dream house. Big mistake. Living alone in the massive two-story has only made him miss her more. When her parents call him out of the blue about their anniversary party in Summer Harbor, Maine, Ryan believes God has dropped a golden opportunity straight in his lap.

Then Ryan shows up on her doorstep, looking as handsome as ever. When he insists he's going to Summer Harbor, with or without her, Abby knows she can't say no. Her parents still think they're married and now Ryan knows it too. It's just a one-week road trip with the man who broke her heart. What could possibly go wrong?

Denise Hunter is the internationally published, bestselling author of more than 40 books, three of which have been adapted into original Hallmark Channel movies. She has won the Holt Medallion Award, the Reader's Choice Award, the Carol Award, the Foreword Book of the Year Award, and is a RITA finalist. When Denise isn’t orchestrating love lives on the written page, she enjoys traveling with her family, drinking chai lattes, and playing drums. Denise makes her home in Indiana where she and her husband raised three boys and are now enjoying an empty nest and two beautiful granddaughters. To learn more about Denise, visit her website DeniseHunterBooks.com; Facebook: @AuthorDeniseHunter; Twitter: @DeniseAHunter; Instagram: @deniseahunter.

▼▲
I'm the author/artist and I want to review #4: Married 'til Monday.
Back
Back