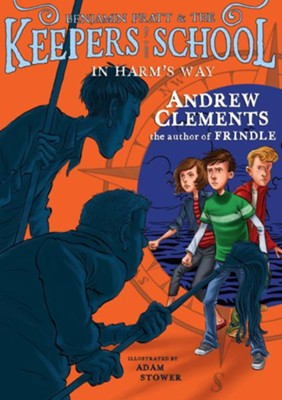 ▼▲
The threat to the Keepers doubles in the fourth Keepers of the School adventure from Andrew Clements, the master of the school story.

Benjamin Pratt and his friends Jill and Robert are determined to save their school from destruction. But just when it seems they’ve finally gotten the upper hand over that awful Janitor Lyman, they’re caught completely off guard by his next move: Lyman has called in reinforcements, and suddenly Benjamin, Jill, and Robert find themselves dodging not one evil janitor, but two. That’s right: Lyman’s got himself a partner. And it quickly becomes clear that Wally, the new guy, is even more corrupt and menacing than Lyman.

Luckily, Ben’s team has been growing too. Plus, thank to the latest safeguard, they also have a secret fund of millions of dollars. But all the money in Massachusetts isn’t enough to stop Lyman and Wally, not when they’ve come this far, and not when they are about to put the most harmful part of their plan into play. Could the next safeguard give the Keepers what they need—or has their battle to save the school already been sunk?

▼▲
Andrew Clements (1949–2019) was the author of the enormously popular Frindle. More than 10 million copies of his books have been sold, and he was nominated for a multitude of state awards, including a Christopher Award and an Edgar Award. His popular works include About Average, Troublemaker, Extra Credit, Lost and Found, No Talking, Room One, Lunch Money, and more. He was also the author of the Benjamin Pratt & the Keepers of the School series. Find out more at AndrewClements.com.

Adam Stower has a rich imagination and loves fantasy and adventure stories. He studied illustration at the Norwich School of Art and Design and at the University of Brighton, and lives with his daughter in Brighton, England.