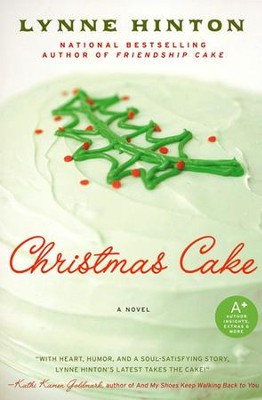 ▼▲
With the holiday season drawing near, the ladies of Hope Springs, North Carolina, are making plans for a cake cookbook--a project that will hopefully lift the spirits of a beloved member of their close-knot quartet. But Margaret Peele is downhearted and uninspired now that her cancer has returned. All she wants for Christmas this year is to visit her mother's Texas hometown...and to see her absent friend, pastor Charlotte Stewart, who left Hope Springs to run a battered women's shelter.

“The perfect recipe for friendship, Christmas Cake is a delightful read for the holidays. This is a book to be shared, a story to be treasured.”
—Joan Medlicott, author of The Ladies of Covington Send Their Love

In a long-awaited sequel to her beloved national bestseller Friendship Cake, author Lynne Hinton returns to the town of Springs with Christmas Cake, a heartwarming story that celebrates the close and lifelong bonds among women. Set in a small fictional Southern community as unforgettable as Jan Karon’s   Mitford, Christmas Cake movingly addresses issues of life and death, faith and love—and good cooking!

▼▲
Lynne Hinton, a minister at St. Pauls United Church of Christ in Albuquerque, New Mexico, has come out with a new cake book called Christmas Cake. Set in the tiny village of Hope Springs, North Carolina, four devoted friends, Louise, Beatrice, Jessie, and Margaret, are in charge of putting together a cake cookbook for their church and organizing a contest to see which cake is best. But spirits are running low for everyone, partly due to the fact that Margaret is in the end stage of cancer. The story meanders along until one womans husband, James, suggests a trip to Goodlett, Texas, where Margaret is from originally, so she can visit her mothers grave. Piling up in funeral home van, the ladies take off for Texas a few days before Christmas. Another friend, a young pastor named Charlotte who runs a womens shelter in Gallop, New Mexico, meets them in Goodlett, and the visit to the gravesite is done. Margaret passes on shortly afterward when the group arrives back in Hope Springs in time for Christmas.

This is a very light, relatively unimaginative novel that explores womens friendships and devotion to each other. There are scarcely any religious references, and no biblical quotations. The women characters are sort of fleshed out, but it is difficult to discern one from another. Margarets fight with cancer is treated with dignity and feeling, and the author does a good job studying the other friends reactions to her. They either want her to continue treatments and fight or just accept the inevitable with grace. The best bonus features of this book are the cake recipes that begin each chapter. As an inspirational book, this one falls short, and it is not recommended for the serious Christian reader.  Anita Tiemeyer, www.ChristianBookPreviews.com

▼▲
“A tasty holiday treat.”
“Hinton perfectly captures the intimacy and humor of women’s friendships in a lighthearted, pleasurable story that’s just in time for the holiday season.”
“With heart, humor, and a soul-satisfying story, Lynne Hinton’s latest takes the cake!”
“The perfect recipe for friendship, Christmas Cake is a delightful read for the holidays. This is a book to be shared, a story to be treasured.”

▼▲
I'm the author/artist and I want to review #4: Christmas Cake.
Back
Back