Skip to main content
4:50 from Paddington - eBook
By: Agatha Christie
Stock No: WW72184EB 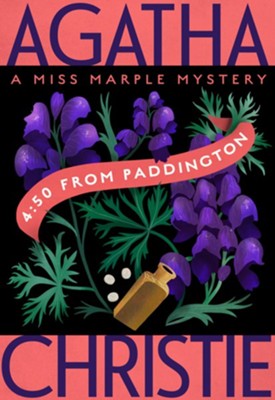 In Agatha Christie’s classic mystery 4:50 From Paddington, a woman in one train witnesses a murder occurring in another passing one…and only Miss Marple believes her story.

For an instant the two trains ran side by side. In that frozen moment, Elspeth McGillicuddy stared helplessly out of her carriage window as a man tightened his grip around a woman's throat. The body crumpled. Then the other train drew away. But who, apart from Mrs. McGillicuddy's friend Jane Marple, would take her story seriously? After all, there are no other witnesses, no suspects, and no case -- for there is no corpse, and no one is missing.

Miss Marple asks her highly efficient and intelligent young friend Lucy Eyelesbarrow to infiltrate the Crackenthorpe family, who seem to be at the heart of the mystery, and help unmask a murderer.

Agatha Christie is the most widely published author of all time, outsold only by the Bible and Shakespeare. Her books have sold more than a billion copies in English and another billion in a hundred foreign languages. She died in 1976, after a prolific career spanning six decades.

“Of all Christie’s detectives, it’s Jane Marple who best understood what can drive ordinary people to the extraordinary act of taking a life.” — S. J. Rozan, Edgar Award-winning author

“The great mistress of the last-minute switch is at it again…. Even the experts have given up any attempts to out-guess Miss Christie.” — New Yorker

“Precisely what one expects: the most delicious bamboozling possible in a babble of bright talk and a comprehensive bristle of suspicion all adeptly managed to keep you much too alert elsewhere to see the neat succession of clues that catch a murderer we never so much as thought of.” — New York Herald Tribune

“A model detective story, there is never a dull moment.” — The Times (London)

▼▲
I'm the author/artist and I want to review 4:50 from Paddington - eBook.
Back
Back