We are OPEN and SHIPPING - click here for shipping estimates
PRE-SUMMER CYBER SALE EXTENDED thru 6/1 ~ Over 2,500 items up to 90% off
365 Fascinating Facts about Jesus - eBook
By: Robert Strand 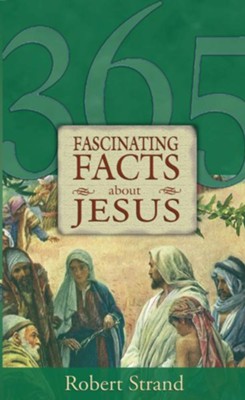 Robert J. Strand has been a best-selling author since 1982 and a pioneer in gift book publishing. In 1994 his "Moments to Give" series was published by New Leaf Press. Other titles followed until today Strand has authored 58 titles. A dynamic speaker, Strand’s style packs human interest stories into his presentations, making audiences cry, laugh and think all at the same time. Prior to writing and speaking, Strand was a senior pastor for 37 years in the upper Midwest, and is listed in the first and second editions of Who’s Who in Religion in America. He and his wife, Donna, have four children and eight grandchildren.

▼▲
I'm the author/artist and I want to review 365 Fascinating Facts about Jesus - eBook.
Back
×
Back
×