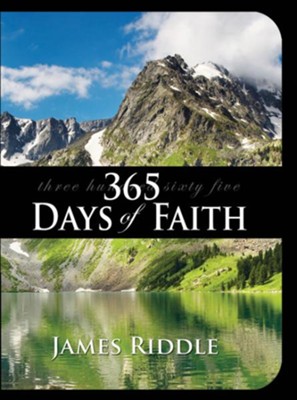 From James Riddle, the author of the bestselling Complete Personalized Promise Bible series, comes this new devotional to strengthen your faith every day of the year. Powerful scriptures, prayers of faith, and declarations of the Word will allow you to enjoy the absolute fulfillment that is available in life through Jesus. Learn the importance of speaking confessions of faith and overcoming obstacles in your life. Fear will be a thing of the past and allow you to experience a happy, healthy and productive life.

James R. Riddle is an educator, author, and public speaker who has spent over twenty-five years of his life studying faith from both a scriptural and scientific perspective. He believes that success is a self-actualizing journey of service and that to serve God is to be the person you are created to be. His friendly and honest approach, coupled with his sincere compassion for the Lord and humanity has won him an interdenominational audience.

James is a man who practices what he preaches. In February of 2008 he was told by his doctor that he would never run again. Today he is a masters track and field athlete who runs three to five miles a day and at the age of fifty can run a hundred meters in less than thirteen seconds. Ask him how he did it and you will hear the Word, "If you can believe, all things are possible to him that believes!"

James holds an honors degree in Creative Writing from the University of Texas at El Paso. He, his wife Jinny, and his four sons (Caleb, Jermaine, Jerome, and Chris) reside in El Paso, Texas. His Complete Personalized Promise Bible series has sold well over 100,000 copies.