Skip to main content
30 Seconds After You Die - eBook
By: Frank Santora
Stock No: WW22988EB 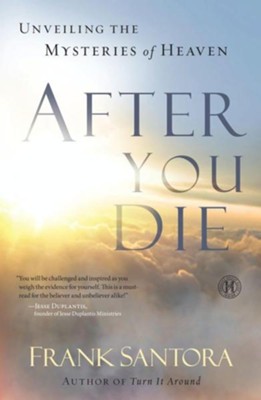 30 Seconds After You Die - eBook

▼▲
At a time when people’s curiosity about the afterlife is stronger than ever, Pastor Frank Santora tackles this issue head-on, delivering cultural, scientific, philosophical, and biblical evidence to unveil the truth about the mysteries of the afterlife. Pastor Frank covers issues such as:

* Is there life after death?

* Do heaven and hell exist?

* Is hell the torture chamber that it’s been purported to be?

* Are there second chances after we die?

* Do we have a soul, and what does it look like?

* What qualifies a person to get into heaven?

* And what does Jesus have to do with it all?

Written for both nonbelievers and those familiar with the Bible, After You Die gives insightful answers to life’s most probing questions while offering hope to everyone who has ever wondered what happens to us after we leave earth.

▼▲
Frank Santora is president of Faith Ministries and Faith Preparatory Schools, Inc., in . A graduate of in , , he holds a bachelors degree in accounting and business and is also an ordained minister with in . After an early career as an accountant, he followed his dream of helping people and is now senior pastor of Faith Church, as well as a motivational speaker for such groups as Amway, Century 21, and IBM International. His television show, Destined to Win, which has been aired both nationally and locally, challenges people weekly to discover the winner within themselves. He currently resides in , with his wife, Lisa, and their two children, Nicole and Joseph.

▼▲
I'm the author/artist and I want to review 30 Seconds After You Die - eBook.
Back
Back