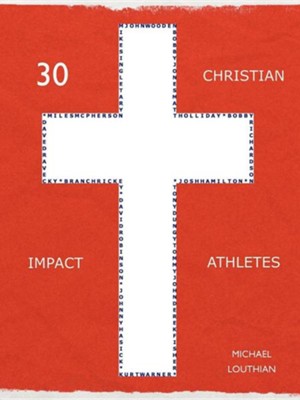 ▼▲
What Christian was named the greatest coach in the history of team sports by Sporting News Magazine? Can you name the Christian who invented basketball? Can you name three Christian athletes who came to the Lord during their professional careers? Do you know which Christian athlete died in the arms of Dr. James Dobson? At the age of five Michael Louthian traded his kindergarden books for the sports pages. His avid desire to know everything there was to know about sports and the sports world never waned. Throughout his life Louthian has soaked up every piece of information he could get his hands on. Through asking questions he was able to uncover answers. In his second book 30 Christian Impact Athletes, Louthian now asks questions about illegal gambling in basketball and steroid use in baseball. As a student of history, Louthian followed professional sports beyond the usual statistics. He absorbed all the available information about the athletes in what has become, during his lifetime, an industry of gigantic proportions and an influence of unprecedented depth on our society. Professional athletes increasingly indulge in behavior that we would never condone in our children or in ourselves. Yet they are given a pass when their behavior is illegal or boarish. Louthian spotlights the lives of thirty Christian athletes who have had a major impact on society and sports. Jackie Robinson, Branch Rickey, Meadowlark Lemon, Albert Pujols, John Wooden, Tim Tebow, and Kurt Warner are among the athletes featured. Each of the thirty athletes travelled a unique road to their acceptance of the Lord Jesus Christ. Louthian challenges Christian fans to stand tall against the secularists who believe that Christianity should be limited to the religion and obituary columns. It is a thought provoking and entertaining read for avid sports fans of all ages.

▼▲
I'm the author/artist and I want to review 30 Christian Impact Athletes.
Back