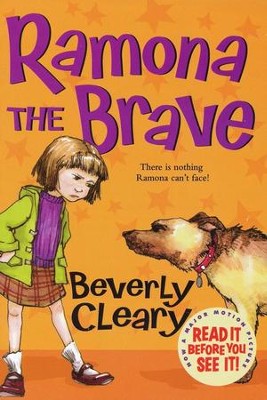 ▼▲
In this touching and funny story, the ebullient Ramona, feeling brave and grown-up, enters first grade. Quickly she finds that her new teacher, Mrs. Griggs, appears perplexed by pupils who like to be different. Since Ramona cannot help being different, clearly the two are incompatible.

Nevertheless, Ramona can be counted on to keep things lively. Enraged when Susan copies her wise old owl prepared for Parents' Night and receives praise for it, Ramona rebels. Overcome by guilt and no longer brave, she tries mightily thereafter to please her teacher, but still Mrs. Griggs infuriatingly reports home that Ramona lacks self-control. Only because she is a girl with spunk, to use her father's word, does Ramona's courage return, earning her at last an uneasy truce with the teacher. 176 pages, softcover.

Newbery Medal winning author Beverly Cleary lovingly chronicles the ups and downs of elementary school woes. This is perfect for fans of Clementine. This chapter book is an excellent choice to share during homeschooling, in particular for children ages 7 to 9 who are reading independently. It’s a fun way to keep your child engaged and as a supplement for activity books for children.

For a girl as enthusiastic about life as Ramona, starting the first grade should be easy! But with a teacher who doesn't understand her, a tattletale classmate, and a scary dog who follows her on the walk home from school, Ramona has a hard time acting like the big girl everyone expects her to be. But when she shows up to school with a missing shoe, Ramona gets a fresh grip on her courage in order to make it through a mortifying situation.

Beverly Cleary is one of America's most beloved authors. As a child, she struggled with reading and writing. But by third grade, after spending much time in her public library in Portland, Oregon, she found her skills had greatly improved. Before long, her school librarian was saying that she should write children's books when she grew up.

Instead she became a librarian. When a young boy asked her, "Where are the books about kids like us?" she remembered her teacher's encouragement and was inspired to write the books she'd longed to read but couldn't find when she was younger. She based her funny stories on her own neighborhood experiences and the sort of children she knew. And so, the Klickitat Street gang was born!

Mrs. Cleary's books have earned her many prestigious awards, including the American Library Association's Laura Ingalls Wilder Award, presented to her in recognition of her lasting contribution to children's literature. Dear Mr. Henshaw won the Newbery Medal, and Ramona Quimby, Age 8 and Ramona and Her Father have been named Newbery Honor Books. Her characters, including Beezus and Ramona Quimby, Henry Huggins, and Ralph, the motorcycle-riding mouse, have delighted children for generations.

Jaqueline Rogers has been a professional children's book illustrator for more than twenty years and has worked on nearly one hundred children's books.

▼▲
I'm the author/artist and I want to review #3: Ramona the Brave.
Back
Back