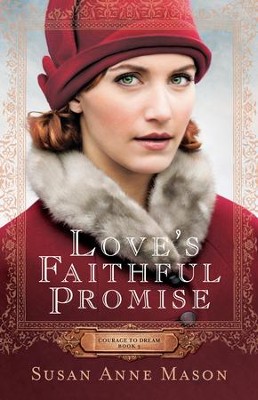 Love's Fatithful Promise #3, in the Courage to Dream series, by Susan Anne Mason

Dr. Matthew Clayborn living in Totonto who is a widower devoted to his four year old daughter Phoebe and his work with wounded soldiers. Deirdre O'Leary is a fiery New Yorker who asks him to use his skills to help her injured mother.  He does not want to disregard his priorities in order to care for her.  When his daughter has a health scare and needs downtime to get well, Deirdre offers a trade for them to escape to her family's farm, if he will care for Mrs. O'Leary.  For his daughter's sake, he agrees to stay as short a time as necessary.

The stay at Irish Meadows does wonders for Phoebe as she begins to flourish.  Matthew finds himself drawn to the O'Leary's, especially Deirdre.  He has no intention of leaving his life in Toronto and she favors her career over marriage.  How will they deal with this undeniable attraction between them?

▼▲
A Stirring Story of Love and Faith and America's Great Promise

When her mother suffers a stroke, medical student Deirdre O'Leary makes the difficult choice to put her career on hold to care for her. Dr. Matthew Clayborne is renowned for his amazing results with patients, but when Deirdre approaches him about helping her mother, she finds him challenging and surly. Deirdre has had enough of complicated men in her life. After her fiancé left her, she vowed never to give a man that kind of power again.

Widower Dr. Matthew Clayborne is devoted to two things: his work with wounded soldiers and his four-year-old daughter, Phoebe. He won't abandon either of these priorities to care for one older woman. However, when Phoebe suffers a health scare, they're offered respite at the Irish Meadows farm, where his daughter's weakened lungs can recover--but only if he cares for Mrs. O'Leary.

Matthew intends to hate Irish Meadows, yet he immediately feels at home, and soon both Mrs. O'Leary and Phoebe are showing improvement. But since he has no intention of leaving his life up north forever, and Deirdre has sworn off marriage in favor of her career, how will they deal with the undeniable attraction between them?

▼▲
Susan Anne Mason is the author of A Worthy Heart and Irish Meadows, which won the Fiction from the Heartland contest from the Mid-American Romance Authors Chapter of RWA. A member of ACFW as well, she lives outside of Toronto, Ontario, with her husband and two children. She can be found online at www.susanannemason.net.

▼▲
I'm the author/artist and I want to review #3: Love's Faithful Promise.
Back
Back