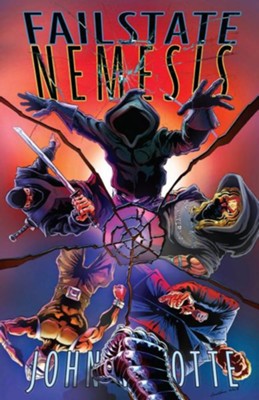 ▼▲
Abaddon will destroy you all!

But then Failstate learns a secret about his father. Rather than the loving family man he remembers, Failstate’s father was a criminal who got himself killed when he crossed the wrong people. Before he can process this new information, he receives a warning that a villain named Abaddon is coming to New Chayton. The message is all the more disturbing since it’s delivered by Lux. She died in Failstate’s arms a year earlier. How can she possibly be alive?

Those mysteries will have to wait, though, as Abaddon storms New Chayton, strewing death and destruction in his wake. But he’s not the only newcomer. Unusual heroes are appearing throughout the city.

Can Failstate get to the bottom of the reappearance of Lux, the influx of new heroes, and the truth behind his father's past––all while keeping Abaddon at bay? Abaddon may prove to be Failstate’s greatest nemesis. But what will Failstate have to sacrifice along the way?

He has published short stories in The Leading Edge Magazine and Dragons, Knights, and Angels in 2006. He was a ACFW Genesis Contest Finalist in 2008. His debut novel, Failstate, was a finalist for the 2013 Christy Awards and he has been a finalist two other times with Numb and Failstate: Nemesis. He is a member of American Christian Fiction Writers.

▼▲
I'm the author/artist and I want to review Failstate: Nemesis (Failstate Series, Book 3).
Back
Back