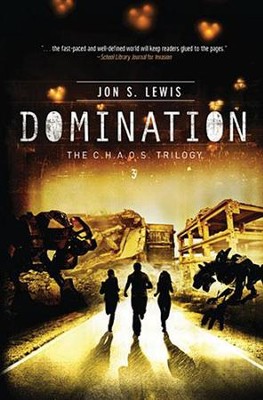 ▼▲
The saga continues as the Thule invasion has spread, with entire cities wiped out by lizard-like creatures with six arms. Sixteen-year-old Colt McAllister and the other cadets at C.H.A.O.S. military academy are thrust into the middle of battle before they complete their training and find themselves captured by the enemy and hauled away to Gathmara. Now, they must find a way to escape and stop the Thule before it's too late and Earth is dominated.

THEIR GOAL IS SIMPLE: TOTAL DOMINATION.

With six arms and jaws that can snap a man in two, the warmongering race of aliens known as the Thule has conquered every planet they’ve attacked.

And now their invasion of Earth has begun.

Humanity’s only hope springs from a mysterious Thule legend about a Betrayer, who they believe will rise up and destroy their people. The American government tried to manufacture their own Betrayer by injecting children with Thule blood but time after time the experiment failed . . . until Colt McAlister.

A decade later, Colt is a 16-year-old cadet at the CHAOS Military Academy where he’s training to defend mankind. But he’s afraid that the alien blood may be turning him into a Thule—and he’s beginning to suspect that fulfilling his role as the Betrayer may cost him everything.

Experience a cosmic battle filled with high-tech gear, gateways to other planets, and ultimate stakes. Not everyone will survive. But heroes will rise up and step into their destiny in this earth-shaking conclusion to the C.H.A.O.S trilogy.

▼▲
“With its mix of high school, space aliens, and conspiracy theories, Lewis’ first book in the C.H.A.O.S. series is I Am Number Four (2010) for a slightly younger set. . . . Mechanical spiders, jet packs, Nazi/alien alliances, and characters with names like Borog and Zandarr will render certain readers putty in Lewis’ capable hands.”

▼▲
I'm the author/artist and I want to review #3: Domination.
Back