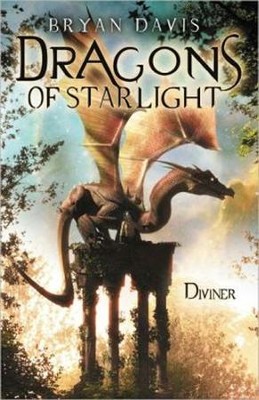 ▼▲
As a Starlighter, Koren knows her destiny is to save her fellow human slaves from the dragons' bondage-but by following the orders of the smooth-talking dragon king, Taushin, has she in fact doomed her people and herself? As Koren struggles over her choices, Elyssa discovers a new aspect to her Diviner gifts when her pendant begins to unlock mysteries surrounding the stardrops from the Exodus star.
Soon Elyssa, along with Jason and his father, also discover new truths behind the dragons' prophecy and learn that Randall has teamed with Magnar and Arxad to wage battle against Taushin's followers. With a major war imminent and talk of a new Starlighter in the air, confusion and uncertainty reigns-something Taushin may have planned for all along.

As a Starlighter, Koren knows her destiny is to save her fellow human slaves from the dragons’ bondage—but by following the orders of the smooth-talking dragon king, Taushin, has she in fact doomed her people and herself? As Koren struggles over her choices, Elyssa discovers a new aspect to her Diviner gifts when her pendant begins to unlock mysteries surrounding the stardrops from the Exodus star.

Soon Elyssa, along with Jason and his father, also uncovers new truths behind the dragons’ prophecy and learns that Randall has teamed with Magnar and Arxad to wage battle against Taushin’s followers. With a major war imminent and talk of a new Starlighter in the air, confusion and uncertainty reign—something Taushin might have planned for all along.

▼▲
Award-winning author Bryan Davis continues the adventures of Jason, Elyssa, and Koren in his latest book Diviner, third in the Dragons of Starlight series. Koren is still under the powerful claw of Taushin, and even though she means well, her Starlighter abilities may endanger the humans if she cannot free herself from the wicked dragon. While Koren raises the guiding star Exodus, Jason and Elyssa work together to form a small alliance of humans and dragons. The two learn more about Taushins evil plans, and Elyssa discovers that her Diviner powers are connected to Exodus, as well. In fact, her gift may be the only hope for their success. As war looms over Starlight, Koren, Jason, and Elyssa must learn what true freedom means and prevent disaster from falling upon the planet.

Davis is an expert storyteller, and Diviner does not fail to impress. The strength of the friendship between Jason and Elyssa is beautiful, a good example of what true friendship means. This story is filled with many incredible lines that not only move the plot along, but also make the reader pause and think about his or her own life. When Koren questions Elyssa, who has never felt the bondage of slavery on Starlight, about whether or not she is truly free, it makes Elyssa stop and consider. As she later discusses it with Jason, the two realize that not all chains are physical.

While the main characters are all quite heroic, each has a personal struggle that he or she must overcome in order to help set the slaves free. Koren struggles with using her Starlighter abilities for good when all she knows is slavery. Elyssa doubts herself and her gifts. Jasons will to fight often makes him blind to other situations that are more important. These struggles make the characters more relatable and serve also as a mirror into our own hearts.

Setting the slaves free serves not only as the main plot, but also as an ongoing theme. Just as Jesus set us free from bondage, the goal of the Jason, Koren, and Elyssa is to throw off the chains and set the captives free. The ideas that Davis uses have a clear basis in scriptural principles. It is refreshing to read a Christian fantasy novel that is both exciting and thought provoking. Those who have read and enjoyed Daviss other dragon-filled works will like Diviner. The ending leaves the reader eager for the next book in which the final battle is to be resolved. From the Northlands on Starlight to Darksphere, Diviner takes the reader on an incredible journey. As a fan of fantasy, I would definitely recommend this book.  Oliva Jessup, www.ChristianBookPreviews.com

▼▲
The fourth book in Davis's Dragons of Starlight series begins with the human slave Koren going on a special mission for her dragon master, Taushin. As she seeks to do his bidding, her human friend, Jason Masters, who is from another world, continues to fight to free all humans in both worlds from bondage. Alternating between Koren's journey and Jason's battles, Davis's novel is steeped in the mythology he has constructed in the three previous novels. In Davis's worlds, stars are magical vehicles that not only transport but become one with Starlighters, who themselves are specially gifted prophetesses. Bits of these stars, called stardrops, have properties that can either severely injure or magically heal humans and dragons alike. This densely constructed universe is chock full of characters, perhaps too many, and is also persistently allegorical. The Starlighters' prophecies, like scripture, are beneficial only when listeners receive them with a humble heart. For those already immersed in Davis's fictional worlds, this latest installment is sure to please, as well as to answer burning questions and raise some new ones. (Sept.) Copyright 2011 Reed Business Information.

▼▲
I'm the author/artist and I want to review #3: Diviner.
Back
Back