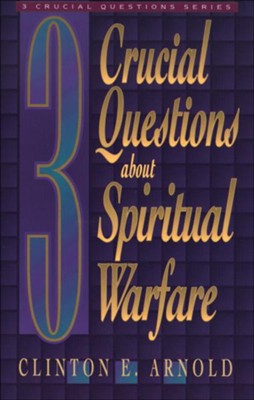 ▼▲
What is spiritual warfare? Can a Christian be demon-possessed? Are we called to engage territorial spirits? These provocative questions stand at the heart of evangelical discussions of the supernatural, and they represent the subject of Clinton Arnold's 3 Crucial Questions about Spiritual Warfare. Arnold brings his exegetical skill and extensive knowledge of early Christianity to bear on the contemporary understanding of the spirit realm. "Spiritual warfare is an integral part of the entire Christian experience," the author explains. "To think that a Christian could avoid spiritual warfare is like imagining that a gardener could avoid dealing with weeds. Our goal should be rather to gain an accurate and sober-minded understanding of spiritual warfare, not a view tainted by frightening superstitions and odd practices."

▼▲
Knowledgeable, accessible answers to these provocative questions: What is spiritual warfare? Can a Christian be demon-possessed? Are we called to engage territorial spirits?

▼▲
Clinton E. Arnold, professor of New Testament language and literature at Talbot School of Theology, is a noted authority on spiritual warfare. He is the author of Power and Magic: The Concept of Power in Ephesians, Powers of Darkness: Principalities and Powers in Paul's Letters, and The Colossian Syncretism: The Interface between Christianity and Folk Belief at Colossae. His Ph.D. degree is from the University of Aberdeen.

▼▲
I'm the author/artist and I want to review 3 Crucial Questions about Spiritual Warfare.
Back
×
Back
×