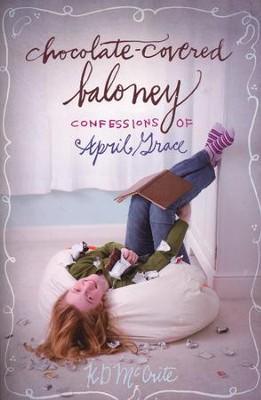 ▼▲
Things are never simple for April Grace, especially in the Reilly family with a long-lost-relative wreaking havoc on the home and a sister who has been acting very distant. When April Grace's sister Myra Sue goes missing, it's up to April Grace to piece together the clues and find her sister before it's too late.

The last thing April Grace wants is more change in her life—but that’s exactly what she gets! Plus, April has a new mystery to solve when Myra Sue starts sneaking around and acting very suspicious!

From snooty new neighbors to starting junior high to getting a new baby brother to having her grandmother get a boyfriend, April Grace has had enough change to last until she is at least 87 years old.

But when it rains, it pours, and April Grace is in for the ride of her life when her prissy, citified neighbor Isabel becomes her gym teacher and a long-lost relative suddenly reappears and throws everything into a tizzy. On top of that, April’s sister, Myra Sue, has been hiding something and sneaking around. April needs to find out what is going on before her silly sister gets herself into trouble again. More important, will April find the grace she needs to handle her topsy-turvy life and forgive past wrongs?

Girls will fall in love with April’s humor and completely relate to her as she deals with family, friends, drama, and both the humor and the heartache that are part of growing up.

▼▲
I'm the author/artist and I want to review #3: Chocolate-Covered Baloney.
Back
Back