We are OPEN and SHIPPING - click here for shipping estimates
PRE-SUMMER CYBER SALE: Shop over 2,500 items up to 90% off through 5/26 >
#3: A Swiftly Tilting Planet
By: Madeleine L'Engle 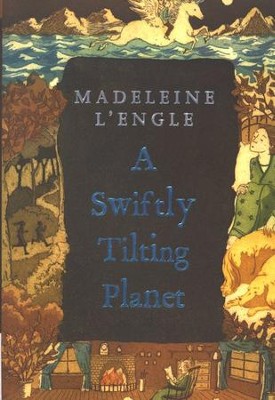 ▼▲
When fifteen-year-old Charles Wallace Murry shouts out an ancient rune meant to ward off the dark in desperation, a radiant creature appears. It is Gaudior, unicorn and time traveler. Charles Wallace and Gaudior must travel into the past on the winds of time to try to find a Might-Have-Been-a moment in the past when the entire course of events leading to the present can be changed, and the future of Earth-this small, swiftly tilting planet-saved.

Book four in Madeleine L'Engle's A Wrinkle in Time Quintet. The Murry and O'Keefe Families enlist the help of the unicorn, Gaudior, to save the world from imminent nuclear war.

In A Swiftly Tilting Planet by Madeleine L'Engle, a companion to the Newbery Award winner A Wrinkle in Time and A Wind in the Door, fifteen-year-old Charles Wallace and the unicorn Gaudior undertake a perilous journey through time in a desperate attempt to stop the destruction of the world by the mad dictator Madog Branzillo.

They are not alone in their quest. Charles Wallace's sister, Meg--grown and expecting her first child, but still able to enter her brother's thoughts and emotions by "kything"--goes with him in spirit.

Charles Wallace must face the ultimate test of his faith and his will as he is sent within four people from another time, there to search for a way to avert the tragedy threatening them all.

Praise for A Swiftly Tilting Planet:

“Charles Wallace (A Wrinkle in Time), now 15, Meg, and the Murrys reappear in an intricately woven fantasy in which the boy time-spins through a tangle of history to find and mend the broken link that threatens to disturb the harmony of today.” —Booklist, starred review

A Wrinkle in Time: The GraphicNovel by Madeleine L'Engle; adapted & illustrated by HopeLarson: A graphic novel adaptation of Madeleine L'Engle's ground-breakingscience fiction and fantasy classic.

Intergalactic P.S. 3 by Madeleine L'Engle; illustrated by Hope Larson: Astandalone story set in the world of A Wrinkle in Time!

And Both Were Young

The Joys of Love

Madeleine L'Engle (1918-2007) was the Newbery Medal-winning author of more than 60 books, including the much-loved A Wrinkle in Time. Born in 1918, L'Engle grew up in New York City, Switzerland, South Carolina and Massachusetts. Her father was a reporter and her mother had studied to be a pianist, and their house was always full of musicians and theater people. L'Engle graduated cum laude from Smith College, then returned to New York to work in the theater. While touring with a play, she wrote her first book, The Small Rain, originally published in 1945. She met her future husband, Hugh Franklin, when they both appeared in The Cherry Orchard.

Upon becoming Mrs. Franklin, L'Engle gave up the stage in favor of the typewriter. In the years her three children were growing up, she wrote four more novels. Hugh Franklin temporarily retired from the theater, and the family moved to western Connecticut and for ten years ran a general store. Her book Meet the Austins, an American Library Association Notable Children's Book of 1960, was based on this experience.

Her science fantasy classic A Wrinkle in Time was awarded the 1963 Newbery Medal. Two companion novels, A Wind in the Door and A Swiftly Tilting Planet (a Newbery Honor book), complete what has come to be known as The Time Trilogy, a series that continues to grow in popularity with a new generation of readers. Her 1980 book A Ring of Endless Light won the Newbery Honor. L'Engle passed away in 2007 in Litchfield, Connecticut.

▼▲
“Charles Wallace (A Wrinkle in Time), now 15, Meg, and the Murrys reappear in an intricately woven fantasy in which the boy time-spins through a tangle of history to find and mend the broken link that threatens to disturb the harmony of today.” —Starred, Booklist