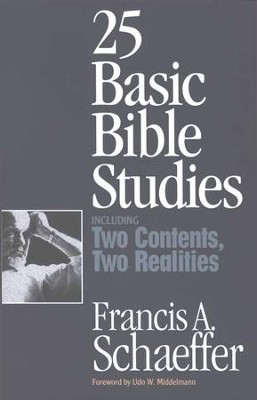 ▼▲
Study the Bible with one of the most influential Christian thinkers of our century! Dr. Schaeffer groups Scripture into themes---what the Bible says about creation, sin, the work of Christ, and more---to show how God's Word addresses real people with real problems and offers real solutions. Expanded to include Schaeffer's classic, Two Contents, Two Realities. 144 pages, softcover from Crossway Books.

Ideal for readers who want to discover what the Bible actually says regarding real problems in the real world. These studies guide the reader through passages that answer the most fundamental questions about God.

Udo W. Middelmann is president of the Francis A. Schaeffer Foundation. He is the author of several books, including The Innocence of God, and has been a longtime worker at Swiss L’Abri.

▼▲
I'm the author/artist and I want to review 25 Basic Bible Studies.
Back
Back