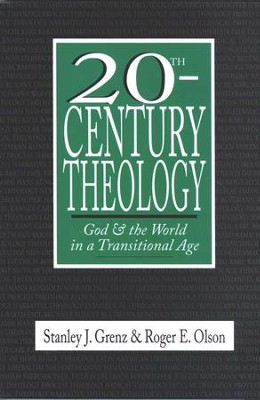 ▼▲
A superb introduction to modern theology. Beginning with the Enlightenment and moving through the 20th century, Grenz and Olson use the themes of God's immanence and transcendence to explore key ideas of major theologians, including Karl Barth, Dietrich Bonhoeffer, and Hans Kung. Lucid and informative, this survey helps you to better understand the relationship between God and his world. 393 pages, softcover from InterVarsity.

▼▲
Now in paperback! Stanley Grenz and Roger Olson offer in this text a sympathetic introduction to twentieth-century theology and a critical survey of its significant thinkers and movements. Of particular interest is their attempt to show how twentieth-century theology has moved back and forth between two basic concepts: God's immanence and God's transcendence. Their survey profiles such towering figures in contemporary theology as Karl Barth, Rudolf Bultmann, Dietrich Bonhoeffer, Reinhold Niebuhr, Paul Tillich, Jurgen Moltmann and Wolfhart Pannenberg. It critiques significant movements like neo-orthodoxy, process theology, liberation theology and theology of hope. And it assesses recent developments in feminist theology, black theology, new Catholic theology, narrative theology and evangelical theology. An indispensable handbook for anybody interested in today's theological landscape.

▼▲
Stanley J. Grenz (1950-2005) earned a B.A. from the University of Colorado at Boulder in 1973, an M.Div. from Denver Seminary in 1976 and a D.Theol. From the University of Munich (Germany) in 1978, where completed his dissertation under the supervision of Wolfhart Pannenberg. Ordained into the gospel ministry in 1976, Grenz worked within the local church context as a youth director and assistant pastor (Northwest Baptist Church, Denver), pastor (Rowandale Baptist Church, Winnipeg), and interim pastor. In addition he preached and lectured in numerous churches, colleges, universities and seminaries in North America, Europe, Africa, Australia and Asia. Grenz wrote or cowrote twenty-five books, the most recent of which is (2004). His other books include (Westminster John Knox), (with John R. Franke; Westminster John Knox), (IVP), (Eerdmans), (with Denise Muir Kjesbo; IVP), (IVP), and (IVP). He has also coauthored several shorter reference and introductory books for IVP, including (with Roger E. Olson), (with Jay T. Smith), and (with David Guretzki and Cherith Fee Nordling). He contributed articles to more than two dozen other volumes, and has had published more than one hundred essays and eighty book reviews. These have appeared in journals such as and the For twelve years (1990-2002), Grenz held the position of Pioneer McDonald Professor of Baptist Heritage, Theology and Ethics at Carey Theological College and at Regent College in Vancouver, British Columbia. After a one-year sojourn as Distinguished Professor of Theology at Baylor University and Truett Seminary in Waco, Texas (2002-2003), he returned to Carey and resumed his duties as Pioneer McDonald Professor of Theology. In 2004 he assumed an additional appointment as Professor of Theological Studies at Mars Hill Graduate School in Seattle, Washington. Roger E. Olson (PhD, Rice University) is professor of theology at George W. Truett Theological Seminary of Baylor University in Waco, Texas. He is the author of and . He is also coauthor of and (both with Stanley J. Grenz), and of (with Christopher A. Hall).

▼▲
"Clear and even-handed. . . . Conservative readers will find this a challenging introduction to the theological discussion, but they will be heartened by its judgments. Liberal readers will contest some of its assumptions, but they will respect its full engagement with alternatives."
"An outstanding introduction: its explanations are lucid and its coverage is comprehensive."

▼▲
I'm the author/artist and I want to review 20th-Century Theology.
Back
×
Back
×