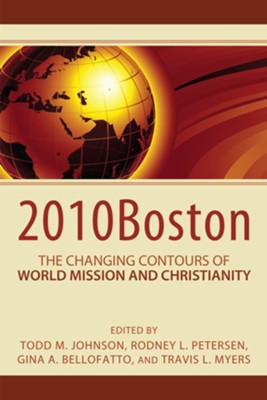 2010Boston: The Changing Contours of World Mission and Christianity - eBook

▼▲
In November 2010, three hundred faculty, students, and others interested in Christian mission gathered in Boston to consider how the world, the global church, and Christian missions have changed since the World Missionary Conference in Edinburgh in 1910 and to reflect on the three previous centennial conferences (Tokyo 2010 in May, Edinburgh 2010 in June, and Cape Town 2010 in October). Participants at "2010Boston" were not delegates from churches and mission agencies, but were students and scholars of various aspects of world Christianity representing the Anglican/Episcopal, Evangelical, mainline Protestant, Orthodox, and Roman Catholic traditions. This conference volume consists of nine keynote messages, five student presentations, three reports from the other conferences, and additional materials from or about 2010Boston. The keynote messages address the history of mission (especially in and from Boston) and the current global context for mission, and suggest modes for future Christian engagement with the world and one another. Student papers address such conference themes as unity in mission, mission and postcolonialism, and discipleship in context. The closing chapter surveys the conference's eight themes and summarizes the outcomes of the 2010Boston process.

▼▲
I'm the author/artist and I want to review 2010Boston: The Changing Contours of World Mission and Christianity - eBook.
Back
Back