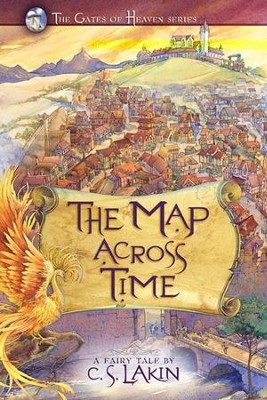 ▼▲
An ancient curse plagues the kingdom of Sherbourne, and unless it is stopped, all will fall to ruin. The King, obsessed with greed, cannot see the danger. But his teenage twin children, Aletha and Adin, know they must act. A hermit leads Adin to a magical map that will send him back in time to discover the origin of the curse.

An ancient curse plagues the kingdom of Sherbourne, and unless it is stopped, all will fall to ruin. The King, obsessed with greed, cannot see the danger. But his teenage twin children, Aletha and Adin, know they must act. A hermit leads Adin to a magical map that will send him back in time to discover the origin of the curse. Once back, Adin must find the Keeper, who protects the Gate of Heaven, but all he has is a symbol as a clue to guide him. Unbeknown to Adin, Aletha follows her brother, but they both arrive in Sherbourne’s past at the precipice of a great war, and there is little time to discover how to counteract the curse.

One unexpected disaster after another forces the twins to make difficult choices. Adin’s only hope to correct the past is to return to the future to manipulate events so his quest can succeed. Through his trials and failures, Adin learns that nothing can stop heaven from accomplishing its goal, and that all events work for the good of those who trust heaven. An epic fairy tale with surprising twists, embracing the enduring power of love and faith.

▼▲
In this second book in the Gates of Heaven series, Lakin (Someone to Blame) spins a tale of twins, a prince and a princess, who must travel through time to undo the curse that threatens their father's kingdom. On its surface a Christian work, using Old Testament quotes and Hebrew words spontaneously uttered in dialogue and exploring themes of healing, sacred places, and the struggle between good and evil, the novel owes more to classic fairy tales than to religious allegory. As in many fairy tales, the characters are flat, existing mostly as types--the beautiful princess, the wise nursemaid, the friendly talking animal--rather than complex human beings. The writing similarly lacks nuance at times; though Lakin is an effective storyteller, her prose often veers into cliché when tackling the story's ambitious themes. Despite flaws, the novel is fast-paced and tightly plotted, which means that the reader will quickly be drawn into the complex twists and turns of the story and, in fairy tale tradition, led toward a surprising yet satisfying conclusion. (Mar.) Copyright 2011 Reed Business Information.

▼▲
I'm the author/artist and I want to review #2: The Map Across Time - eBook.
Back
Back