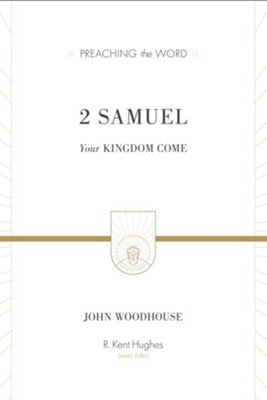 King David stands as one of the most important figures of world history. From children’s storybooks to Michelangelo’s famous statue, ancient Israel’s most famous king is still remembered and recognized by people around the world three thousand years after he lived. Helping readers deepen their understanding of David’s tumultuous reign, John Woodhouse highlights David’s important role in salvation history—a history that began with Israel but now encompasses God’s plan for the whole world. Designed as a trustworthy resource for pastors who preach and teach on a regular basis, this commentary ultimately argues that David’s story is important because it lays the crucial foundation for the life and ministry of Jesus Christ, “the son of David.”

Part of the Preaching the Word series.

John Woodhouse (DPhil, Victoria University of Manchester) served as principal of Moore Theological College in Sydney, Australia, from 2002 to 2013. Previously, he worked in pastoral ministry in a suburb of Sydney. He has published articles in various academic journals and is the author of three volumes in Crossways Preaching the Word commentary series.

▼▲
I'm the author/artist and I want to review 2 Samuel: Your Kingdom Come - eBook.
Back
Back