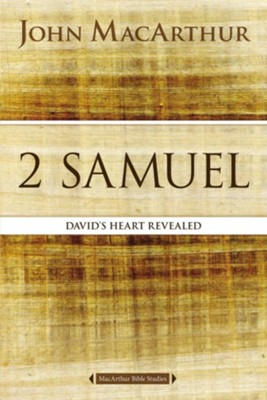 David is known as Israel's greatest king, but he was not a super-hero. He had to fight many battles to establish his throne, and when he did become king, he committed murder, adultery, and brought disaster on his family. He was a man with human failings, yet he was also a man after God's own heart. David depended on God's grace for forgiveness when he stumbled—the same grace that is available to us today.

In this study, pastor John MacArthur will guide you through an in-depth look at the historical period beginning with David's struggle to establish his throne, continuing through his sin and repentance, and concluding with the tragic rebellion of his son Absalom.

Studies include close-up examinations of Joab, Amnon, Tamar, Absalom, and others, as well as careful considerations of doctrinal themes such as "Obedience and Blessing" and being a "Man After God's Own Heart."

The MacArthur Bible Study series is designed to help you study the Word of God with guidance from widely respected pastor and author John MacArthur. Each guide provides intriguing examinations of the whole of Scripture by examining its parts and incorporates:

Widely known for his thorough, candid approach to teaching God's Word, John MacArthur is a popular author and conference speaker. He has served as pastor-teacher of Grace Community Church in Sun Valley, California, since 1969. John and his wife, Patricia, have four married children and fifteen grandchildren. John's pulpit ministry has been extended around the globe through his media ministry, Grace to You, and its satellite offices in seven countries. In addition to producing daily radio programs for nearly two thousand English and Spanish radio outlets worldwide, Grace to You distributes books, software, and digital recordings by John MacArthur. John is chancellor of The Master's University and Seminary and has written hundreds of books and study guides, each one biblical and practical. Bestselling titles include The Gospel  According to Jesus, Twelve Ordinary Men, Twelve Extraordinary Women, Slave, and The MacArthur Study Bible, a 1998 ECPA Gold Medallion recipient.

▼▲
I'm the author/artist and I want to review 2 Samuel: David's Heart Revealed - eBook.
Back
Back