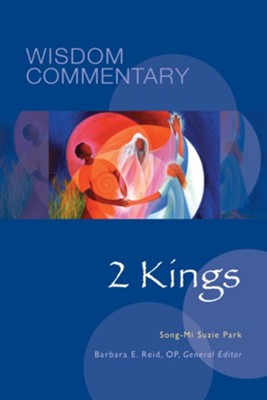 The Second Book of Kings—a book whose very title seems to assert the prerogative of male rule—is in fact filled with fascinating female characters as well as issues related to gender. In this commentary, Song-Mi Suzie Park argues that an interrogation of the masculinity of YHWH, Israel’s deity, functions as the driving force behind the narrative in 2 Kings. While the sufficiency of YHWH’s masculinity is affirmed by his military and reproductive prowess, it is also challenged and deconstructed through the painful defeats that end the book. Through a series of close readings, Park elucidates how the story of Israel’s monarchic past in 2 Kings unfolds through a process of continual reformulation of masculinity and femininity in relation to YHWH and Israel.

Song-Mi Suzie Park (PhD, Harvard University, 2010) serves as the associate professor of Old Testament at Austin Presbyterian Theological Seminary, where she teaches courses on literary approaches to the biblical text, families, and issues of gender and sexuality. She is the author of Hezekiah and the Dialogue of Memory (Fortress Press, 2015) as well as several articles and essays.

Barbara E. Reid, general editor of the Wisdom Commentary series, is a Dominican Sister of Grand Rapids, Michigan. She is the president of Catholic Theological Union and the first woman to hold the position. She has been a member of the CTU faculty since 1988 and also served as vice president and academic dean from 2009 to 2018. She holds a PhD in biblical studies from The Catholic University of America and was also president of the Catholic Biblical Association in 2014–2015. Her most recent publications are Wisdom’s Feast: An Invitation to Feminist Interpretation of the Scriptures (Eerdmans, 2016) and Abiding Word: Sunday Reflections on Year A, B, C (3 vols.; Liturgical Press, 2011, 2012, 2013).

▼▲
"Park argues that 2 Kings both affirms the masculinity of the God of Israel, as evidenced primarily by his military prowess, and challenges it in light of the destruction first of Israel and then of Judah. Like all the commentaries in this series, this volume is well-researched, carefully argued, and often challenging in its conclusions."
The Bible Today
"The latest in the Wisdom Commentary series, Suzie Park's new book focuses on the present, Masoretic text of 2 Kings, though with periodic comment on some of the ancient versions and presumed sources and redactional layers behind the Masoretic form. While Park is particularly interested, as in the other volumes of the series, in what a feminist lens can reveal, she is quite aware that 2 Kings is not always eager to oblige; and so she considers also other approaches, literary, historical, and theological, as contexts in which to set her feminist inquiries. On all of these approaches to 2 Kings, Park offers a generous compendium of scholarly views, always as formulated in her own clear and accessible way and not stinting on her own insights into the text. Indeed, she is able to show how a feminist lens can illuminate aspects of the narrative that other approaches had slighted or missed. Even where one may differ with her interpretations, they remain provocative, forcing the reader to reconsider old views. Park, in short, has written a commentary of value from which both lay and scholarly audiences will definitely profit."
Peter Machinist, Hancock Research Professor of Hebrew and Other Oriental Languages, Harvard University
"Highly recommended to all academic libraries."
Catholic Library World
"Park’s 2 Kings reflects the current state of feminist biblical scholarship: sophisticated and rigorous, infusing trained exegesis with clergy and lay voices (and in some cases adding feminist activists to the mix). She addresses one group in particular that has received little attention in comparable commentaries: widows. Park invites readers to shift their focus from the prophet’s strategy to meet the widow’s need and instead to sit with the widow for a moment and consider the intersecting issues that led to her poverty."
The Christian Century
"2 Kings is an especially fraught book of the Bible. The overwhelming masculinity of YHWH is traced throughout the text. But the chapters make clear that such imagery is tenuous at best, inviting the reader to reimagine other influences that shape the narrative and thus might reshape concepts of the divine."
Women's Alliance for Theology, Ethics and Ritual (Water)

▼▲
I'm the author/artist and I want to review 2 Kings: Wisdom Commentary.
Back