We are OPEN and SHIPPING - click here for shipping estimates
PRE-SUMMER CYBER SALE EXTENDED thru 6/1 ~ Over 2,500 items up to 90% off
#2: Get Me out of Here!
By: James Patterson, Chris Tebbetts
Illustrated By: Laura Park 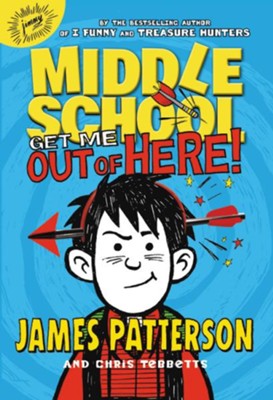 After sixth grade, the very worst year of his life, Rafe Khatchadorian thinks he has it made in seventh grade. He's been accepted to art school in the big city and imagines a math-and-history-free fun zone. Wrong! It's more competitive than Rafe ever expected, and to score big in class, he needs to find a way to turn his boring life into the inspiration for a work of art. His method? Operation: Get a Life! Anything he's never done before, he's going to do it, from learning to play poker to going to a modern art museum. But when his newest mission uncovers secrets about the family Rafe's never known, he has to decide if he's ready to have his world turned upside down.

▼▲
James Patterson was selected by kids across America as the Children's Choice Book Awards Author of the Year in 2010. He is the internationally bestselling author of the Middle School series, I Funny, Confessions of a Murder Suspect, and the Maximum Ride, the Witch & Wizard, Daniel X, and Alex Cross series. His books have sold more than 275 million copies worldwide, making him one of the bestselling authors of all time. He lives in Florida.
Chris Tebbetts is the co-author of two other books in the Middle School series and the author of The Viking, a fantasy adventure series for young readers. He lives in Vermont.
Laura Park is the illustrator of two other books in the Middle School series and I Funny, and a minicomics series called Do Not Disturb My Waking Dream. Her work has appeared in the Best American Comics. She lives in Chicago.