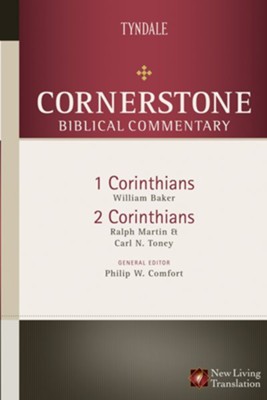 ▼▲
Written by top New Testament scholars, William Baker on 1 Corinthians, and Ralph P. Martin with Carl N. Toney on 2 Corinthians, the Tyndale Cornerstone Biblical Commentary offers the reader an expositional commentary that proceeds section-by-section and is pinned to the text of the New Living Translation. Although not technical, and very readable, it also contains Greek word helps that aid the reader understand the issues and questions that remain in interpreting these important Epistles.Designed to equip students, pastors, and laypeople with up-to-date scholarship in order to better understand and apply every thought contained in God's Word. Explicating Paul's letters to the Corinthians, this accessible resource offers passage-by-passage commentary that explores context, major theological themes, and important interpretive issues; and provides Greek word helps. Based on the New Living Translation.

▼▲
The Cornerstone Biblical Commentary series (18 volumes) provides students, pastors, and laypeople with up-to-date, accessible evangelical scholarship on the Old and New Testaments. Presenting the message for each passage, as well as an overview of other issues relevant to the text, each volume equips pastors and Christian leaders with exegetical and theological knowledge so they can better understand and apply God’s Word. This volume includes the entire NLT text of 1st and 2nd Corinthians. Ideal for the NLT reader who wants to do more in-depth study.

William R. Baker, Ph.D., University of Aberdeen, is professor of New Testament at Cincinnati Bible Seminary in Cincinnati, Ohio. He is the general editor of Stone-Campbell Journal and the author and editor of several books and articles, including Evangelicalism and the Stone-Campbell Movement and Sticks and Stones: The Biblical Ethics of Talk. He has also written a commentary on 2 Corinthians for the College Press NIV Commentary Series.
Ralph P. Martin, Ph.D., University of London, is in his fifth decade as a teacher, scholar, and mentor. He is Distinguished Scholar in Residence at Fuller Theological Seminary, at the Graduate School of Theology of Azusa Pacific University, and at Logos Evangelical Seminary in Pasadena, California. He is the author of numerous studies and commentaries on the New Testament, including Worship in the Early Church, the Philippians in The Tyndale New Testament Commentary series, and James in the Word Biblical Commentary, for which he also serves as New Testament editor. He also co-edited the Dictionary of Paul and His Letters and the Dictionary of the Later New Testament and Its Developments. Ordained to the Baptist ministry in 1949, Dr. Martin has pastored churches in Dunstable, Southport, and Gloucester, England.
Carl N. Toney, Ph.D., Loyola University Chicago, is adjunct assistant professor of New Testament at Fuller Theological Seminary in Pasadena, California. He edited and contributed to the revised edition of 2 Corinthians in the Word Biblical Commentary series and is the author of Paul's Inclusive Ethic: Resolving Community Conflicts and Promoting Mission in Romans 14-15. A licensed minister in the American Baptist Convention, Dr. Toney is also a member of the Society of Biblical Literature.

▼▲
I'm the author/artist and I want to review 1 & 2 Corinthians: NLT Cornerstone Biblical Commentary.
Back
Back