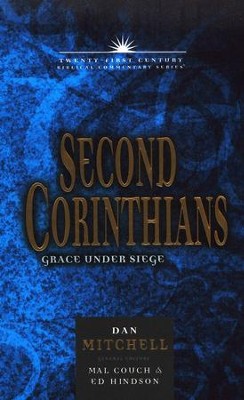 ▼▲
Today, as in Paul's day, grace is under siege, but victory is in sight. In 2 Corinthians, Paul speaks to believers as a coach who speaks to his players during the big game. In presenting his commentary on 2 Corinthians, the most personable and autobiographical of Paul's epistles, Dan Mitchell encourages believers to follow the game plan to live for Christ and defend the truth.

Dr. Daniel R. Mitchell is associate dean of Liberty Baptist Theological Seminary and professor of theological studies. Dan has been in full-time ministry since 1964, serving as a chaplain, pastor, and seminary professor. He has been at Liberty since 1976. He is a graduate of Washington Bible College (B.A.), Capital Bible Seminary (Th.M.), and Dallas Theological Seminary (S.T.M.,; Th.D.)

Series Editor: Mal Couch is founder and former president of Tyndale Theological Seminary and Biblical Institute in Fort Worth, Texas. He served as a pastor for twenty years, and taught Theology and the Biblical Languages for fourteen years at Philadelphia College of the Bible, Moody Bible Institute, and Dallas Theological Seminary. His other publications include A Bible Handbook to Revelation, and Dictionary of Premillennial Theology. He is president of Scofield Ministries in Clifton, TX.

WHAT IS YOUR GAME PLAN FOR LIVING?

LIKE A MOTIVATIONAL SPEAKER or a couch in the locker room at halftime., Paul addresses the Corinthian believers as a friend, a mentor, and a apostle. At a point where others trying to manipulate them as a sect of Judaism, denying the gospel of grace, Paul's passion and zeal are more apparent in this book than in any of his other writings.

Today, the struggle is not for Christianity to be unique from Judaism, but to be unique among the melting pot of religions in the world. And that which set us apart, the grace of God to send His Son to die on the cross, has never been more under siege.

Paul had declared the truths of the gospel, but others came to Corinth after him and sough to undermine all he had tough. The Christians in Jerusalem were in dire need of help. The false teachers were claiming that Paul was not even an apostle. Rumors and half-truths were common rhetoric. In order to defend the truth, Paul had to defend the call God had placed upon him, and all the things that call had led him to endure. Dan Mitchell brings Paul's word into focus challenge every believer to defend the truth, to care for those in need, and to work together in unity to accomplish the goal of presenting Christ to a dying needy world.

DR. DANIEL R. MITCHELL is the academic dean of Liberty Baptist Theological Seminary and professor of Theological Studies. He has been in full time ministry since 1964, serving as a chaplain, a pastor of two churches in Virginia, and a seminary professor. He has been with Liberty since 1976.

Dan lives with his wife, Nancy, in Forest Virginia. They have four grown children and ten grandchildren.

"The godly men involved in the Twenty-First Century Commentary Series are dedicated to the inspiration of Scripture and to the blessed hope of the return of the Lord. Without hesitation, I commend the work for Sunday school teachers, pastor, and all interested students of the Bible."

"I'm honored to recommend the Twenty-First Century Biblical Commentary series. I Know I can trust the evangelical soundness and doctrinal integrity of the authors who are laboring to give us books that will serve to the cause of Christ for generations to come."

Dr. Tim LaHaye, Co-author of The Left Behind series

▼▲
I'm the author/artist and I want to review 2 Corinthians: Grace Under Siege.
Back
Back