BIG SUMMER BLOWOUT: 3 Days Only! Save up to 90% thru Wednesday. Shop now >
2 Corinthians: Wisdom Commentary
By: Antoinette Clark Wire 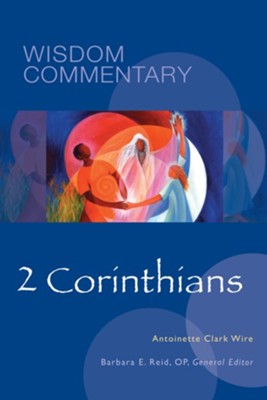 When 2 Corinthians is read as a whole in the early manuscripts, we hear a distraught and defensive Paul, struggling to recover the respect of the Corinthians that he assumed in 1 Corinthians. Scholars have supplied a recent visit gone awry to explain this, but Wire argues that the Corinthians have not kept the restrictions Paul laid down in his earlier letter. It is Paul who has changed. No longer able to demand that they imitate his weakness as he embodies Jesus’ death, he concedes and even celebrates that they embody Jesus’ power and life and thereby demonstrate the effectiveness of his work among them.

With special attention to the women in Corinth who pray and prophesy, Wire looks at each part of 2 Corinthians through three feminist lenses: a broad focus on all bodies within the tensions of the ecosystem as Paul sees it; a mid-range focus on the social, political, and economic setting; and a precise focus on his argument as evidence of an interaction between Paul and the Corinthians. When Paul ends with "The grace of the Lord Jesus Christ, the love of God, and the partnership of the Holy Spirit," the Corinthians have pressed him to reshape his message from "yes but" and "no" to "yes," from a tenacity of qualifiers and subordinations to an overflow of encouragements.

Antoinette Clark Wire is Robert S. Dollar Professor Emerita of New Testament Studies at San Francisco Theological Seminary and the Graduate Theological Union where she has taught since 1973. Dr. Wire is a graduate of Yale Divinity and Claremont Graduate School. Raised in China by missionary parents, she has lived her adult life largely in California.

▼▲
"Wire offers a fresh interpretation of Second Corinthians from a historically informed and rhetorically sophisticated feminist perspective. In continuation of the brilliant and influential work she has done in her previous book on First Corinthians, The Corinthian Women Prophets, Wire provides here a careful analysis on Paul's use of rhetoric in Second Corinthians to see what the new epistolary exigency is like behind Second Corinthians, especially, concerning the women in the Corinthian church and to understand how Paul responds to it. The result is a coherent narrative of Paul's message in Second Corinthians that is properly situated against the immediate and particular epistolary situation in the Corinthian church as well as the larger sociocultural and political background of the gender dynamic in the first-century Roman imperial world."
Eugene Eung-Chun Park, Dana and David Dornsife Professor of New Testament, San Francisco Theological Seminary

"In Wire's analysis, what most concerns Paul is whether the Corinthian assembly, where evidently he is marginal among a swirl of leading voices,&#39;can recognize Paul's beleaguered work as valid if he recognizes `the spirit of the living God' in them.' Maybe Paul should have found this a simple challenge. He didn't, and this new work, from one of the most innovative interpreters of Paul in her generation, lays out the contexts—philosophical, political, social, scriptural, and personal—and interactions that explain Paul's involved, ambivalent defense. A work in active dialogue with many facets of scholarship, church, and women's experience, its concise reasoning invites a close reading that paradoxically impels the reader forward in excitement."
Robert B. Coote, Senior Research Professor of Hebrew Exegesis and Old Testament, San Francisco Theological Seminary

"Wire, after reviewing the case for 2 Corinthians a s a fusion of several letters, reads it instead as a single letter of Paul. She demonstrates the capacity of a feminist approach to offer fresh insight into Paul's perspective."
The Bible Today

▼▲
I'm the author/artist and I want to review 2 Corinthians: Wisdom Commentary.
Back
×