We are OPEN and SHIPPING - click here for shipping estimates
#2: Code 13
By: Don Brown 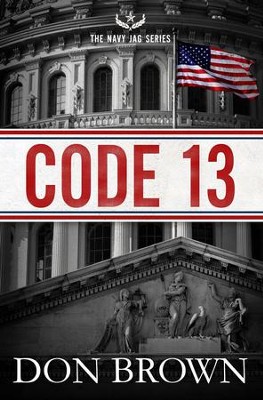 The chance to work with an old flame turns lethal when the legal writers assigned to Code 13 turn up dead.  Far from backing off, Caroline McCormick volunteers to take over the project in hopes of catching the killer…unless she’s killed first.  Drones…military strategy…and suspense up and down the East Coast make this a thriller that’s not for the faint-of-heart.  This is the second saga in Don Brown’s Navy Jag Series.

THE U.S. NAVY’S BILLION-DOLLAR CONTRACT FOR THE SALE OF DRONES LANDS TWO NAVY JAG OFFICERS IN THE GUN SIGHTS OF A KILLER.

Caroline is just getting her feet wet at the prestigious Code 13, but is thankful for at least one familiar face—her old flame, P.J. MacDonald. He loops her into the assignment he is currently working on—the legality of a proposed drone-sharing contract with Homeland Security that would allow the sale of drones for domestic surveillance. The contractor wants a legal opinion clearing the contract for congressional approval. But the mob wants the proposal dead-on-arrival.

When P.J. is gunned down in cold blood and a second JAG officer is killed, one thing becomes clear: whoever is ordered to write the legal opinion on the drones becomes a target. Which is exactly why Caroline goes to her commanding officer and volunteers to write the legal opinion herself. She is determined to avenge P.J.’s death and trap the killer, even if that means making herself a target.

It is a deadly game of Russian roulette for the sake of justice, but Caroline is determined to see it through, even if it costs her life.

▼▲
'Brown’s intriguing second Navy JAG thriller (after 2015’s Detained) follows Lt. Cmdr. Caroline McCormick from shipboard duty to the Pentagon’s Code 13, the legal brain trust of the U.S. Navy, and into a harrowing personal and professional mission... Brown addresses the serious constitutional issues raised by the domestic use and control of drones, but readers should be prepared for corrupt, spineless politicians and other stock characters in an entry sure to please the author’s many fans. '