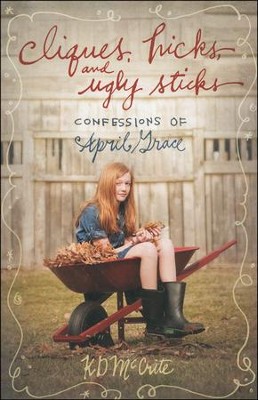 ▼▲
Isabel St. James is the resident drama coach and drama queen and she needs help putting together the church play after an automobile accident. After being forced to help, April's fall is now devoted to spending every afternoon with two drama queens, Isabel and April's older sister Myra Sue. If that's not bad enough, the new boy at school won't leave her alone, and then Mama drops the biggest bombshell of all-April Grace is no longer going to be the baby of the family . . . 304 pages, softcover from Thomas Nelson.

Just when April Grace thought the drama was over . . .

After an automobile accident, Isabel St. James—resident drama coach and drama queen—needs help putting together the church play. Mama insists April Grace and Myra Sue will help. April’s fall is now devoted to spending every afternoon with Isabel and Myra Sue—if anyone is as big of a drama queen as Isabel, it’s Myra Sue. Plus, she’s dumb. (Okay, not dumb, but "older sister dumb.") If that’s not enough, Isabel is wreaking havoc in the community trying to get Rough Creek Road paved, the new boy at school will not leave her alone, and then Mama drops the biggest bombshell of all . . . April Grace is no longer going to be the baby of the family . . .

Girls will completely relate to April and love her sense of humor as she deals with siblings, boys, and the many changes that come with growing up.

▼▲
I'm the author/artist and I want to review #2: Cliques, Hicks, and Ugly Sticks.
Back
Back