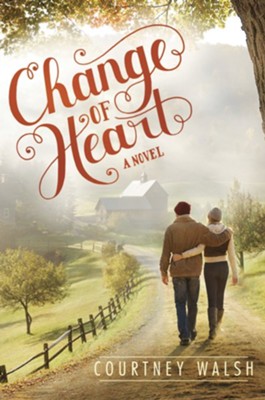 This product is part of our current Black Friday promotion.
Buy Item

Change of Heart #2 in the Paper Heart series, by Courtney Walsh

Evelyn Brandt was a talented artist before she became the wife of a Colorado Senetor.  The majority of her time was spent volunteering for society functions.  Her life fell apart when the FBI informed her that her husband was arrested for embezzlement.  It turned out to be a long drawn out scandal that would end in divorce.  Throughout that process her friends suggest she use her artistic talent to redesign the city's lampposts.  Trevor Whitney is involved in that project and was once close with Evelyn.  He let her stay in his guest house and the two became close for a second time.  Is a new beginning a possibility?  Will there be a change of heart?

▼▲
A Colorado senator’s wife, Evelyn Brandt seems to have it all. But her carefully constructed life comes toppling down when the FBI crashes her society brunch with news that her husband has been arrested for embezzlement, and he’s far from repentant. It turns out this was only the start of his indiscretions—for which he has little regret.

As the weeks following the scandal turn into months, Evelyn withdraws, even shirking her duties with the philanthropic Valentine Volunteers. The inquisitive women of the group are determined not to let Evelyn’s divorce destroy her. They have big plans for her to use her long-forgotten artistic talent to reimagine the city’s iconic lamppost hearts. But doing so will force Evelyn to work closely with Trevor Whitney, her ex-husband’s former best friend. Though she and Trevor used to be close—and he’s been letting her hide in his guesthouse—his gruffness conveys his unease with the situation.

Amid the beauty of Trevor’s farm and the comfort of a paintbrush, Evelyn starts to reclaim the dreams she sacrificed to become the perfect politician’s wife. And as creativity inspires them both, Whit begins to see the girl he fell in love with before his friend—and his own mistakes—stole his chance. Possibilities for a new beginning emerge, but long-kept secrets threaten to ruin everything. After so much time, is a change of heart too much to hope for?

▼▲
I'm the author/artist and I want to review #2: Change of Heart.
Back
Back