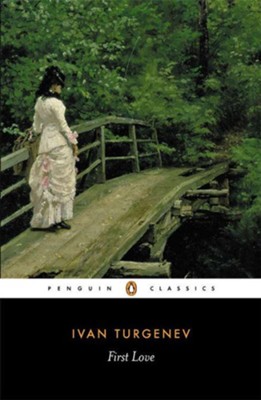 ▼▲
First Love begins as a gentle comedy: a young boy falls in love with Zinaida, the capricious daughter of a down-at-heel Princess. But when he discovers the identity of her lover, the mood turns to one of torment and despair. With a realism remarkable for its sensitivity and truthfulness, Turgenev describes the boy's growth of knowledge as he is awakened to the complex nature of adult love. Contrasted against the background of mid-nineteenth-century Russia and shadowed by a subtle evocation of more mature and tragic passion, First Love is one of Turgenev's most powerful stories.

When the down-at-heel Princess Zasyekin moves next door to the country estate of Vladimir Petrovich's parents, he instantly and overwhelmingly falls in love with his new neighbour's daughter, Zinaida. But the capricious young woman already has many admirers and as she plays her suitors against each other, Vladimir's unrequited youthful passion soon turns to torment and despair - although he remains unaware of his true rival for Zinaida's affections. Set in the world of nineteenth-century Russia's fading aristocracy, Turgenev's story depicts a boy's growth of knowledge and mastery over his own heart as he awakens to the complex nature of adult love.

▼▲
Ivan Sergeyevich Turgenev was born in 1818 in the Province of Orel, and suffered during his childhood from a tyrannical mother. After the family had moved to Moscow in 1827 he entered Petersburg University where he studied philosophy. When he was nineteen he published his first poems and, convinced that Europe contained the source of real knowledge, went to the University of Berlin. After two years he returned to Russia and took his degree at the University of Moscow. In 1843 he fell in love with Pauline Garcia-Viardot, a young Spanish singer, who influenced the rest of his life; he followed her on her singing tours in Europe and spent long periods in the French house of herself and her husband, both of whom accepted him as a family friend. He sent his daughter by a sempstress to be brought up among the Viardot children. After 1856 he lived mostly abroad, and he became the first Russian writer to gain a wide reputation in Europe; he was a well-known figure in Parisian literary circles, where his friends included Flaubert and the Goncourt brothers, and an honorary degree was conferred on him at Oxford. His series of six novels reflect a period of Russian life from 1830s to the 1870s: they are Rudin (1855), A House of Gentlefolk (1858), On the Eve (1859; a Penguin Classic), Fathers and Sons (1861), Smoke (1867) and Virgin Soil (1876). He also wrote plays, which include the comedy A Month in the Country; short stories and Sketches from a Hunter’s Album (a Penguin Classic); and literary essays and memoirs. He died in Paris in 1883 after being ill for a year, and was buried in Russia.

Isaiah Berlin, O.M., C.B.E., first President of Wolfson College, Oxford, from 1966 to 1975, is a Fellow of All Souls. He was a Fellow of New College from 1938 to 1950 and Professor of Social and Political Theory at Oxford from 1957 to 1967. He served as President of the British Academy of Arts and Letters. He holds honorary degrees from the universities of Brandies, Cambridge, Columbia, East Anglia, Glasgow, Harvard, Hull, Jerusalem, Liverpool, London and Tel Aviv. Sir Isaiah's work covers a wide variety of subjects, but most of his work has appeared in periodicals and symposia. Russian Thinkers is the first of four volumes edited by Henry Hardy which bring together for the first time all of Isaiah Berlin's major essays (excluding those already published in Four Essays on Liberty and Vico and Herder). Isaiah Berlin's other contributions to Russian studies include his translation of Ivan Turgenev's First Love (available from Penguin) and his Introduction to Alexander Herzen's memoirs, My Past and Thoughts. Sir Isaiah was awarded the Jerusalem Prize in 1979 for the expression in his writings of the idea of the freedom of the individual in society.

▼▲
I'm the author/artist and I want to review 1st Love.
Back