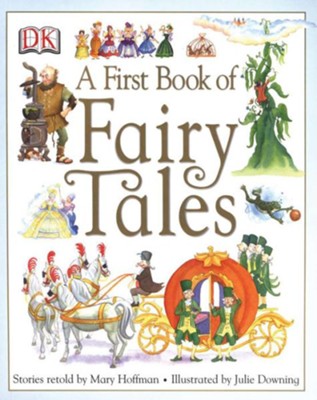 ▼▲
In this beautifully illustrated book, 14 classic fairy tales are retold for young children. Old favorites, such as "Cinderella" and "Jack and the Beanstalk," are presented alongside some lesser known stories, such as "The Fisherman and his Wife" and "Diamonds and Toads." Mary Hoffman's charming retellings use simple, lyrical language ideal for reading aloud, while Julie Downing's illustrations bring the characters to life. The stories in this collection show the consequences of greed, pride, and vanity, but also tell of the love that grows from a kind heart and a cheerful nature. And along the way, there is a wealth of magic and fun to be enjoyed.

▼▲
Mary Hoffman has written more than 70 books for children, and her powers of observation bring vitality and humor to all her stories and retellings. Her titles for DK include Henry's Baby and A First Bible Story Book. Her best-known picture books are Amazing Grace, Three Wise Women, and An Angel Just Like Me. Mary lives in Oxfordshire with her husband, and they have three daughters. The girls were brought up on myths and legends, of which Mary and her husband have an extensive collection.Julie Downing has illustrated more than 45 picture books, including The Firekeeper's Son, No Hugs Till Saturday, Lotus and Feather, and First Mothers. She has a degree from the Rhode Island School of Design, and she teaches watercolor and children's book illustration at the Academy of Art University. Downing's art has been featured in galleries throughout England and the United States, as well as in the Society of Illustrator's Original Art Show in New York City. She has won many awards, including the New York Public Library Best Books Award and a Parents' Choice Award.

▼▲
I'm the author/artist and I want to review 1st Book Of Fairy Tales.
Back