Skip to main content
Rome 1960: The Olympics That Changed the World - eBook
By: David Maraniss
Stock No: WW8966EB 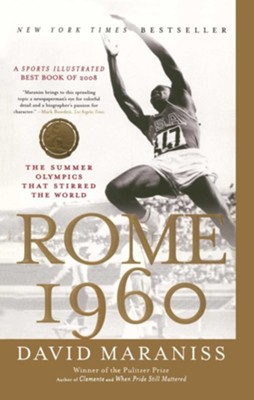 Rome 1960: The Olympics That Changed the World - eBook

▼▲
From the critically acclaimed and bestselling author David Maraniss, a groundbreaking book that weaves sports, politics, and history into a tour de force about the 1960 Rome Olympics, eighteen days of theater, suspense, victory, and defeat

David Maraniss draws compelling portraits of the athletes competing in Rome, including some of the most honored in Olympic history: decathlete Rafer Johnson, sprinter Wilma Rudolph, Ethiopian marathoner Abebe Bikila, and Louisville boxer Cassius Clay, who at eighteen seized the world stage for the first time, four years before he became Muhammad Ali.

Along with these unforgettable characters and dramatic contests, there was a deeper meaning to those late-summer days at the dawn of the sixties. Change was apparent everywhere. The world as we know it was coming into view.

Rome saw the first doping scandal, the first commercially televised Summer Games, the first athlete paid for wearing a certain brand of shoes. Old-boy notions of Olympic amateurism were crumbling and could never be taken seriously again. In the heat of the cold war, the city teemed with spies and rumors of defections. Every move was judged for its propaganda value. East and West Germans competed as a unified team less than a year before the Berlin Wall. There was dispute over the two Chinas. An independence movement was sweeping sub-Saharan Africa, with fourteen nations in the process of being born. There was increasing pressure to provide equal rights for blacks and women as they emerged from generations of discrimination.

Using the meticulous research and sweeping narrative style that have become his trademark, Maraniss reveals the rich palate of character, competition, and meaning that gave Rome 1960 its singular essence.

▼▲
Born in Detroit, David Maraniss is an associate editor at The Washington Post. Maraniss is a Pulitzer Prize–winning journalist and bestselling author of Once in a Great City: A Detroit Story; First in His Class: A Biography of Bill Clinton; Rome 1960: The Olympics that Stirred the World; Barack Obama: The Story; Clemente: The Passion and Grace of Baseball’s Last Hero; They Marched into Sunlight: War and Peace, Vietnam and America, October 1967; and When Pride Still Mattered: A Life of Vince Lombardi, which was hailed by Sports Illustrated as "maybe the best sports biography ever published." He lives in Washington, DC, and Madison, Wisconsin.

▼▲
I'm the author/artist and I want to review Rome 1960: The Olympics That Changed the World - eBook.
Back
Back