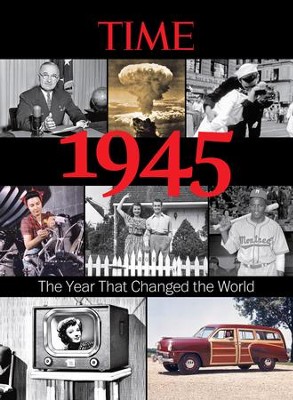 TIME 1945: The Year That Changed the World - eBook

▼▲
In the 12 months of 1945, the world was radically reshaped: both Hitler's Germany and imperial Japan fell to Allied armies, in scenes of death and destruction that still defy belief. A new world order began to emerge, as the U.S. and the U.S.S.R. began their long Cold War duel, the United Nations was founded, and Europe's colonial empires began to collapse. New technologies unleashed by the war-radar, computers, rockets and atomic power-began to revolutionize our lives. At home, millions flocked to new suburban homes, television began to replace radio, and returning vets sparked an era-defining "baby boom." Now TIME captures all these earth-shaking events in 1945: The Year That Changed the World. Join us as vintage photos, illuminating graphics and fascinating "then and now" stories recapture the sense of turmoil, hope and change that followed history's greatest conflict.

▼▲
I'm the author/artist and I want to review TIME 1945: The Year That Changed the World - eBook.
Back
Back