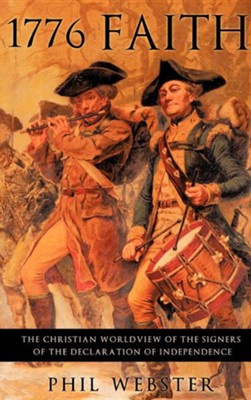 ▼▲
Phil Webster has a passion for communicating the Christian worldview of the Founding Fathers to this generation. His book 1776 Faith shows the Christian worldview of the signers of the Declaration of Independence, other Founders, the days of prayer for the country, the original state constitutions which had a place for God, instances of Divine Providence on the young nation, the Christian colleges of the era, the effect of the Great Awakening on the Founders and the Christian music of the era. Phil is a graduate of Asbury College in Wilmore, Kentucky and received his M.Div degree from Trinity Evangelical Divinity School in Deerfield, Illinois. He worked with Operation Mobilization in Spain, England and on board the M.V. Doulos in South America. He taught for five years at Salisbury Christian School and received a Who's Who Among America's Teachers in 1998. He is married to Jean and has four children, Carolyn, Joseph, Daniel and Elizabeth. The research for 1776 Faith comes from reading the primary sources of the 25 volumes of Letters of the Delegates of Continental Congress] 1774-1789 and 34 volumes of Journals of Continental Congress. He challenges you to take the Founders Challenge and see if the Founders were deists, atheists or had a Christian worldview.

Tell us a little about yourself.  Christ found me on my seventeenth birthday. I attended Asbury College, did missionary work with Operation Mobilization in Spain, England and South America on the M.V. Doulos. Graduated from Trinity Evangelical Divinity School with a M. Div. degree. Married to Jean and have 4 children.

What was your motivation behind this project?  My father was very concerned about the moral decay of our country. After he died I saw the 25 volumes of "Letters of the Delegates to Congress 1774-1789 and gave myself "The Founders' Challenge" to see if the Founders were deists, atheists or had a Christian worldview (vast majority did)

What do you hope folks will gain from this project?  This and 1787 FAITH (just published in July 2016) gives Christians a resource to teach and show the Christian heritage of the signers of the Declaration of Independence and Constitution

How were you personally impacted by working on this project?  It woke me up to see how the new nation dedicated itself to God on April 30, 1789 at St. Paul's Chapel in New York City. We as a nation need to visualize the Founders going to St. Paul's Chapel and dedicating

Who are your influences, sources of inspiration or favorite authors / artists?  The Bible, rich with history is our lighthouse. I like reading the primary sources of the Founding Fathers like John Jay, John Adams, Alexander Hamilton, etc. I admire the courage of Aleksandr Solzhenitsyn to chronicle the history of his people when it was not popular.

Anything else you'd like readers / listeners to know:  II Kings 22 talks about how the nation of Judah had lost the Book of the Law. The United States is in a similar situation. Most of the nation is oblivious to the Christian heritage of the Founders, especially in New England.