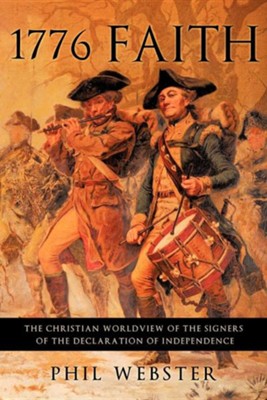 ▼▲
Phil Webster has a passion for communicating the Christian worldview of the Founding Fathers to this generation. His book 1776 Faith shows the Christian worldview of the signers of the Declaration of Independence, other Founders, the days of prayer for the country, the original state constitutions which had a place for God, instances of Divine Providence on the young nation, the Christian colleges of the era, the effect of the Great Awakening on the Founders and the Christian music of the era. Phil is a graduate of Asbury College in Wilmore, Kentucky and received his M.Div degree from Trinity Evangelical Divinity School in Deerfield, Illinois. He worked with Operation Mobilization in Spain, England and on board the M.V. Doulos in South America. He taught for five years at Salisbury Christian School and received a Who's Who Among America's Teachers in 1998. He is married to Jean and has four children, Carolyn, Joseph, Daniel and Elizabeth. The research for 1776 Faith comes from reading the primary sources of the 25 volumes of Letters of the Delegates of Continental Congress] 1774-1789 and 34 volumes of Journals of Continental Congress. He challenges you to take the Founders Challenge and see if the Founders were deists, atheists or had a Christian worldview.

What was your motivation behind this project?  My father was very upset about the moral decline in our country. At his funeral as I was backing up the van to pick up the flowers, I heard David Barton for the first time on the radio. I read his book "Original Intent" and saw that John Jay was President of the American Bible Society. As a history major, I did not remember anyone teaching me that before. That caused me to write a book on John Jay and that research led me to write 1776 FAITH, 1787 FAITH and 1776 DELMARVA.

What do you hope folks will gain from this project?  This book and 1787 FAITH will give you resources to teach your children and grandchildren about the documented Christian worldview of the signers of the Declaration of Independence and Constitution. Chapter five of 1787 FAITH shows how we dedicated our new government to God on April 30, 1789 at St. Paul's Chapel. I ask people: "Do you think God remembers that we dedicated the government to Him on April 30, 1789?"

How were you personally impacted by working on this project?  The research has made me knowledgeable about the whole field of the Founders, not just John Jay. I love being around really good reenactors like Chris Lowell who in my opinion is the best Ben Franklin. "I had the privilege of presenting Ben Franklin's views and values to an audience in Annapolis, MD recently. By my side was Phil Webster, the perfect John Jay for that or any evening. Phil's John Jay was totally believable, bringing Jay's views to life with much more detail and historical accuracy than I'm sure the audience expected. Phil's awareness of Jay and the historical context in which he lived and worked is enormous. Additionally, Phil is a generous and modest fellow, and altogether a pleasure to work with." Chris Lowell May 2015

Anything else you'd like readers / listeners to know:  I would like to recreate April 30, 1789 at St. Paul's Chapel with really good reenactors who know the Christian worldview of these Founders deeply. Also would like to have the same crowd do reenactments on July Fourth. You can see my videos on my 1776FAITH website