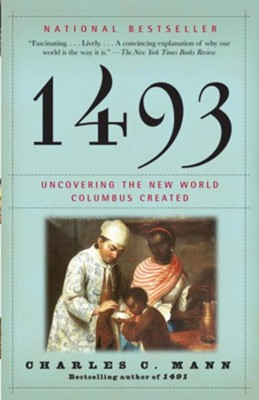 ▼▲
From the author of 1491—the best-selling study of the pre-Columbian Americas—a deeply engaging new history of the most momentous biological event since the death of the dinosaurs.

More than 200 million years ago, geological forces split apart the continents. Isolated from each other, the two halves of the world developed radically different suites of plants and animals. When Christopher Columbus set foot in the Americas, he ended that separation at a stroke. Driven by the economic goal of establishing trade with China, he accidentally set off an ecological convulsion as European vessels carried thousands of species to new homes across the oceans.

The Columbian Exchange, as researchers call it, is the reason there are tomatoes in Italy, oranges in Florida, chocolates in Switzerland, and chili peppers in Thailand. More important, creatures the colonists knew nothing about hitched along for the ride. Earthworms, mosquitoes, and cockroaches; honeybees, dandelions, and African grasses; bacteria, fungi, and viruses; rats of every description—all of them rushed like eager tourists into lands that had never seen their like before, changing lives and landscapes across the planet.

Eight decades after Columbus, a Spaniard named Legazpi succeeded where Columbus had failed. He sailed west to establish continual trade with China, then the richest, most powerful country in the world. In Manila, a city Legazpi founded, silver from the Americas, mined by African and Indian slaves, was sold to Asians in return for silk for Europeans. It was the first time that goods and people from every corner of the globe were connected in a single worldwide exchange. Much as Columbus created a new world biologically, Legazpi and the Spanish empire he served created a new world economically.

As Charles C. Mann shows, the Columbian Exchange underlies much of subsequent human history. Presenting the latest research by ecologists, anthropologists, archaeologists, and historians, Mann shows how the creation of this worldwide network of ecological and economic exchange fostered the rise of Europe, devastated imperial China, convulsed Africa, and for two centuries made Mexico City—where Asia, Europe, and the new frontier of the Americas dynamically interacted—the center of the world. In such encounters, he uncovers the germ of today’s fiercest political disputes, from immigration to trade policy to culture wars.

In 1493, Charles Mann gives us an eye-opening scientific interpretation of our past, unequaled in its authority and fascination.

▼▲
Charles C. Mann, a correspondent for The Atlantic, Science, and Wired, has written for Fortune, The New York Times, Smithsonian, Technology Review, Vanity Fair, and The Washington Post, as well as for the TV network HBO and the series Law & Order. A three-time National Magazine Award finalist, he is the recipient of writing awards from the American Bar Association, the American Institute of Physics, the Alfred P. Sloan Foundation, and the Lannan Foundation. His 1491 won the National Academies Communication Award for the best book of the year. He lives in Amherst, Massachusetts.

▼▲
Having resurrected the isolated splendors of the pre-Columbian Americas in his bestselling 1491, Mann explores the global convergences--and upheavals--inaugurated by their discovery in this fascinating survey of the "Homogenocene" era. Mann traces the subtle, epochal influences of the intercontinental "Columbian Exchange" of flora, fauna, commodities, and peoples, showing how European honeybees and earthworms remade New World landscapes; how New World corn, potatoes, and fertilizer ignited Eurasian population booms; how Old World diseases prompted an eruption of slavery in the Western Hemisphere (the influx of Africans, not Europeans, to the Americas, Mann notes, was the main demographic result of the Contact); how Latin American silver undermined China's Ming Dynasty; and how the decimation of Indian peoples changed the world's climate. The author interweaves research on everything from epidemiology to economics into a lucid historical panorama that's studded with entertaining studies of Chinese pirate fleets, courtly tobacco rituals, and the bloody feud between Jamestown colonists and the Indians who fed and fought them, to name a few. Brilliantly assembling colorful details into big-picture insights, Mann's fresh, challenge to Eurocentric histories puts interdependence at the origin of modernity. 35 illus.; 12 maps. (Aug.) Copyright 2011 Reed Business Information.

"Voltaire would have loved Charles C. Mann’s outstanding new book, 1493. In more than 500 lively pages, it not only explains the chain of events that produced those candied fruits, nuts and gardens, but also weaves their stories together into a convincing explanation of why our world is the way it is . . . Mann has managed the difficult trick of telling a complicated story in engaging and clear prose while refusing to reduce its ambiguities to slogans. He is not a professional historian, but most professionals could learn a lot from the deft way he does this . . . Most impressive of all, he manages to turn plants, germs, insects and excrement into the lead actors in his drama while still parading before us an unforgettable cast of human characters. He makes even the most unpromising-sounding subjects fascinating. I, for one, will never look at a piece of rubber in quite the same way now . . . The Columbian Exchange has shaped everything about the modern world. It brought us the plants we tend in our gardens and the pests that eat them. And as it accelerates in the 21st century, it may take both away again. If you want to understand why, read 1493."
-Ian Morris, The New York Times Book Review

"Mann’s book is jammed with facts and factoids, trivia and moments of great insight that take on power as they accumulate . . . Fascinating and complex, exemplary in its union of meaningful fact with good storytelling, 1493 ranges across continents and centuries to explain how the world we inhabit came to be."
-Gregory McNamee, The Washington Post

"For fans of long-form nonfiction, 1493 presents multitudinous delights in the form of absorbing stories and fascinating factoids . . . As a writer, Mann displays many fine qualities: evenhandedness, a sense of wonder, the gift of turning a phrase . . . Mann loves the world and adopts it as his own."
-Jared Farmer, Science

"Even the wisest readers will find many surprises here . . . Like 1491, Mann’s sequel will change worldviews."
-Bruce Watson, San Francisco Chronicle

"Engaging . . . Mann deftly illuminates contradictions on a human scale: the blind violence and terror at Jamestown, the cruel exploitation of labor in the silver mines of Bolivia, the awe felt by Europeans upon first seeing a rubber ball bounce."
-The New Yorker

"A muscular, densely documented follow-up [to Mann’s 1491] . . . 1493 moves at a gallop . . . As a historian Mann should be admired not just for his broad scope and restless intelligence but for his biological senstivity. At every point of his tale he keeps foremost in his mind the effect of humans’ activities on the broader environment they inhabit."
-Alfred W. Crosby, The Wall Street Journal

"In the wake of his groundbreaking book 1491 Charles Mann has once again produced a brilliant and riveting work that will forever change the way we see the world. Mann shows how the ecological collision of Europe and the Americas transformed virtually every aspect of human history. Beautifully written, and packed with startling research, 1493 is a monumental achievement."
-David Grann, author of The Lost City of Z

"Mann is trying to do much more than punch holes in conventional wisdom; he’s trying to piece together an elaborate, alternative history that describes profound changes in the world since the original voyage of Columbus. What's most surprising is that he manages to do this in such an engaging way. He writes with an incredibly dry wit."
-Charles Ealy, Austin American-Statesman

"The chief strength of Mann’s richly associative books lies in their ability to reveal new patterns among seemingly disparate pieces of accepted knowledge. They’re stuffed with forehead-slapping ’aha’ moments . . . If Mann were to work his way methodically through the odd-numbered years of history, he could be expected to publish a book about the global impact of the Great Recession sometime in the middle of the next millennium. If it’s as good as 1493, it would be worth the wait."
-Doug Childers, Richmond Times-Dispatch

"Almost mind-boggling in its scope, enthusiasm and erudition . . . Almost every page of 1493 contains some extraordinarily provocative argument or arrestingly bizarre detail . . . Ranging freely across time and space, Mann’s book is full of compelling stories . . . A tremendously provocative, learned and surprising read."
-Dominic Sandbrook, The Times of London

"A book to celebrate . . . A bracingly persuasive counternarrative to the prevailing mythology about the historical significance of the ’discovery’ of America . . . 1493 is rich in detail, analytically expansive and impossible to summarize . . . [Mann’s book] deserves a prominent place among that very rare class of books that can make a difference in how we see the world, although it is neither a polemic nor a work of advocacy. Thoughtful, learned and respectful of its subject matter, 1493 is a splendid achievement."
-John Strawn, The Oregonian

"Despite his scope, Mann remains grounded in fascinating details: why tobacco exhausted the soil; how fevers and blights attacked their victims; what made rubber stretchy; how maize cultivation in the highlands could ruin rice paddies in the lowlands. Such technical insights enhance a very human story, told in lively and accessible prose."
-Alex Nalbach, Cleveland Plain-Dealer

"Spirited . . . One thing is indisputable: Mann is definitely global in his outlook and tribal in his thinking . . . Mann’s taxonomy of the ecological, political, religious, economic, anthropological and mystical melds together in an intriguing whole cloth."
-Jonathan E. Lazarus, The [Newark] Star-Ledger

"Mann’s excitement never flags as he tells his breathtaking story . . . There is grandeur in this view of the past that looks afresh at the different parts of the world and the parts each played in shaping it."
-Marek Kohn, Financial Times

"A fascinating survey . . . A lucid historical panorama that’s studded with entertaining studies of Chinese pirate fleets, courtly tobacco rituals, and the bloody feud between Jamestown colonists and the Indians who fed and fought them, to name a few. Brilliantly assembling colorful details into big-picture insights, Mann’s fresh challenge to Eurocentric histories puts interdependence at the origin of modernity."
-Starred review, Publishers Weekly

"In 1491 Charles Mann brilliantly described the Americas on the eve of Columbus’s voyage. Now in 1493 he tells how the world was changed forever by the movement of foods, metals, plants, people and diseases between the ’New World’ and both Europe and China. His book is readable and well-written, based on his usual broad research, travels and interviews. A fascinating and important topic, admirably told."
-John Hemming, author of Tree of Rivers

"Fascinating . . . Engaging and well-written . . . Information and insight abound on every page. This dazzling display of erudition, theory and insight will help readers to view history in a fresh way."
-Roger Bishop, BookPage

"Charles Mann expertly shows how the complex, interconnected ecological and economic consequences of the European discovery of the Americas shaped many unexpected aspects of the modern world. This is an example of the best kind of history book: one that changes the way you look at the world, even as it informs and entertains."
-Tom Standage, author of A History of the World in Six Glasses

▼▲
I'm the author/artist and I want to review 1493: Uncovering the New World Columbus Created - eBook.
Back
Back