Skip to main content
CUSTOMER APPRECIATION SALE: Thousands of starry deals through 6/22!
1174 BC: The Exodus Discovered!
By: Rick Mercer
Stock No: WW715184 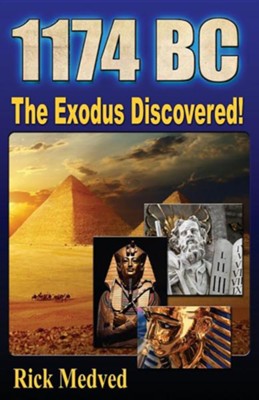 ▼▲
Finally, the actual date of the Exodus has been discovered For thousands of years the epic stories of Moses, the Israelites and their exodus out of Egypt and into the Promised Land have been told to millions of awe inspired listeners. It is a grand tale of miracles and deliverance, cemented as the cornerstone of faith for both Judaism and Christianity. An historic battle of mighty heroes and evil villains clashing both on earth and in the heavens But there's one problem No physical Egyptian proof has ever been found to corroborate these biblical stories. That's right. No mention of Moses, Joseph, the Israelites, or the Exodus has been identified in the Egyptian historical records. Until now This is a mystery that has perplexed biblical scholars and historians for thousands of years. How could it be that this historic collision of civilizations cannot be confirmed through the records of Egypt? Did they really happen? Has there been a cover up? Have the stories been somehow misinterpreted or embellished over the passage of time? I took on a mission to find the truth and the answers I discovered are truly astounding. It turns out the reason no proof has been found is because we have been looking in the wrong era The evidence is plainly available, but until now no one has been able to put the puzzle pieces together. Now, for the first time, we are able to piece together the true timeline of the Hebrew origins and know, based on actual Egyptian records plus confirmed in the Bible, the true date of the Exodus... 1174 BC