Skip to main content
SPRING CYBER EVENT STARTS NOW: And it's a really BIG deal! Up to 88% off through 5/24>
#11: Framed in France
By: Jeff Brown
Illustrated By: Macky Pamintuan
Stock No: WW189844 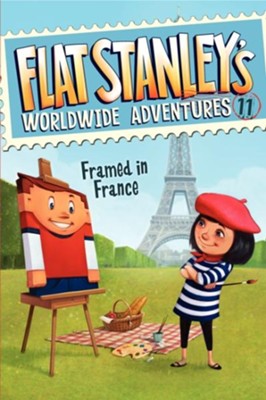 ▼▲
Flat Stanley is on a top-secret, super-important mission to Paris, France, where he must pose as a painting in the Louvre. Hopefully working undercover as a painting, he can find out who is stealing expensive works of art! But Stanley soon becomes very bored until he meets Etoile, a talented art student who shows him around the City of Light. But when Stanley returns to the museum, he discovers that the Mona Lisa has been switched out for a fake! Can Stanley find the real painting and figure out who the thief is? Recommended for ages 7 to 10 years.

Flat Stanley is taking over the world, one city at a time! In this electrifying eleventh installment in the renowned Flat Stanley’s Worldwide Adventures chapter book series, the Lambchop family is headed to the city of light, Paris!

Posing as a painting in the Louvre on a wall across from the famous Mona Lisa?—c'est magnifique! However, Stanley soon grows bored—until he meets Etoile, an art student who shows him around Paris. But when Stanley goes back to the museum, he realizes that the Mona Lisa looks . . . different. It's been switched for a fake! Will Stanley be able to nab the thief before he or she strikes again?

Macky Pamintuan is an accomplished artist who lives in the Philippines with his wife, Aymone; their baby girl, Alison; and a West Highland white terrier named Winter.

▼▲
I'm the author/artist and I want to review #11: Framed in France.
Back
Back