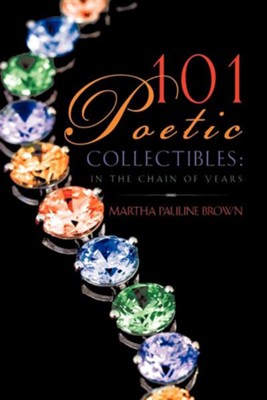 ▼▲
MARTHA PAULINE GERBER BROWN is of German-Swiss parentage. Her father was a Bible Teacher in Pandora, OH. And MARTHA became a Bible Teacher after her education at Moody and at Taylor University. Her specialty is to analyze and apply the Bible for teaching children and women. A second gift is to write Bible-truth poetry. MARTHA with her husband, O. Carl, count twenty-one years on the field of Haiti, W.I. They also count sixty-six married years. And have two sons, eight grandchildren, and nine great-grandchildren. MARTHA is known for composing a new Bible-inspired Christmas poem each December, sixty-six of them. She calls them Christmas Musings in this book. MARTHA also wrote other casual poems, thirty-five of them, of random inspiration she calls Various Mementos. So, MARTHA calls her book 101 POETIC COLLECTIBLES: - In The Chain of Years. Behold the gems of inspiration, as sparkling jewels, in 101 POETIC COLLECTIBLES: - In The Chain of Years. This two-part book of poems takes us into the joy MARTHA PAULINE BROWN had across the chain of years in writing poems, now, first to be read by others besides the friends and family who received a poem each December - 66 poems called Christmas Musings. In them we may observe prophetic Scripture fulfilled in the angelic announcement of God's "IMPRINT." Read how "a Savior is born for you, Christ the Lord " See God's Son rejected by man, crowned with thorns and wrapped in blood. In His transfer from the cross to the throne, He is Savior, Death's Conqueror, Intercessor, Advocate to God and Coming King - for your receptive heart bringing "gems" of eternal value. Also, 101 POETIC COLLECTIBLES brings Martha's 35 random poems as Various Mementos of casual souvenirs, each ending in climax coming from the soul of Martha's poetic pen.

▼▲
I'm the author/artist and I want to review 101 Poetic Collectibles.
Back