101 Most Powerful Proverbs in the Bible
By: Steve Rabey, Lois Mowday Rabey 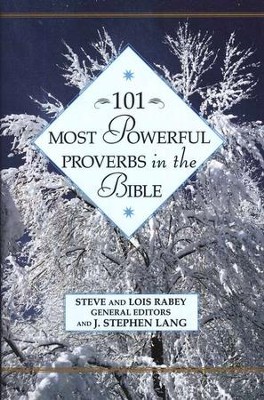 101 Most Powerful Proverbs in the Bible

▼▲
Choosing friends wisely, controlling your tongue, honoring marriage vows, practicing honesty . . . these are only a few of the issues the Book of Proverbs addresses. Looking below the surface to reveal the truth of these sage sayings, thoughtful meditations will help you apply their practical wisdom to your everyday life. 236 pages, hardcover from Warner Faith.

▼▲
101 MOST POWERFUL PROVERBS IN THE BIBLE takes the best of the proverbs and details them for us. Filled with illustrations of daily life, it seeks to remind us of what's truly important--living wisely, kindly, and well.

▼▲
This heavily anecdotal, occasionally touching and exasperatingly uneven collection of meditations surveys the Book of Proverbs, the venerable aphorisms of Hebrew scripture, as an extended lesson in character development. The reader will come away with a helpful sense of the range of topics covered by the ancient Proverbs writers, who were capable of comforting clarity about what happens to fools and evildoers and also of caustic observations about money management (and mismanagement) that could be ripped from today's financial pages. Drawing on sources as diverse as his immediate family, Calvin Coolidge and the rock group the Eagles, Lang portrays Proverbs as a collection of fundamental lessons in morality that need to be relearned in each generation. Although Lang, a well-established author and former book editor, is clearly well versed in European and American history, he sometimes descends to gross generalizations, e.g., "the main reason that so many cities today are hellish places to live is that so many of the inhabitants have no self-control." Some will be amused, and some probably annoyed, by the writer's fondness for Confederate General "Stonewall" Jackson and the 16th-century Scottish Protestant firebrand John Knox. Lang's essays are often powerful, occasionally incisive and more often than not instructive. Like the other books in the "101 Most Powerful" series (previous installments have explored biblical prayers and promises), each brief meditation closes with a resolution for readers; some of these are useful, some close to silly. (Jan. 21) Copyright 2003 Reed Business Information.

▼▲
I'm the author/artist and I want to review 101 Most Powerful Proverbs in the Bible.
Back
×
Back
×