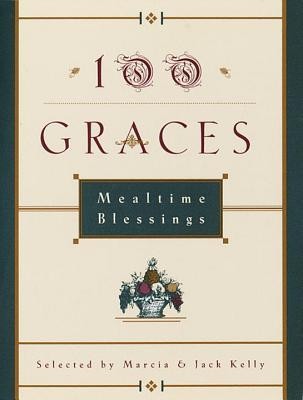 ▼▲
Available now in a small-format paperback edition, this beloved book features 100 ways of giving thanks for the daily repast in a glorious collection of ancient and contemporary graces from many traditions, including Christian, Jewish, Hindu, Buddhist, Islamic, and Native American. Two-color interior.

▼▲
Marcia and Jack Kelly are writers who live in New York. Over the years they have chosen monasteries and retreats as their stopping places in their travels, and have now visited more than 250 such places. Their first book, Sanctuaries: The Northeast, was published in 1991. Sanctuaries: The West Coast and Southwest followed in 1993, and Sanctuaries: The Complete United States appeared in 1996. They are also the authors of The Whole Heaven Catalog: A Resource Guide to Products, Services, Arts, Crafts & Festivals of religious, Spiritual & Cooperative Communities. Marcia Kelly is also the author of Heavenly Feasts: Memorable Meals from Monasteries, Abbeys, and Retreats.

▼▲
I'm the author/artist and I want to review 100 Graces: Mealtime Blessings.
Back