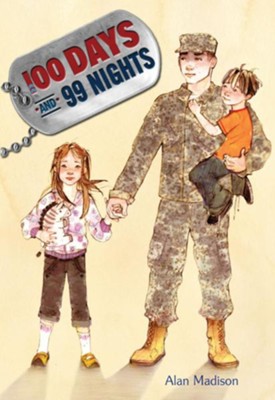 ▼▲
One hundred days, fifteen Saturdays, 3 months. No matter how you say it, it's a long time to miss someone, especially if that someone is your dad. While Esme's father is away on a military tour of duty, she feels that it's her duty to be in charge. That's what her dad would want, but it's not so easy with a pesky little brother like Ike around. Join Esme as she counts down the days to her father's return and see just how much can change in 100 days and 99 nights. Recommended for ages 8 to 12.

In a timely, but not politically charged way, author Alan Madison looks at the way a family copes with having a parent away on a 100 day, 99 night military tour of duty through the eyes of the very loveable Esmerelda (Esme) Swishback McCarthur. Esme wants to be good while her dad is away. In fact, she feels like it's her duty to be good. But being good can be hard, especially if you have a little brother like Ike. By following Esme's story, as she awaits her father's return, readers will see how heroism can translate to every member of a family.

Aside from the military families that this book serves, readers who wonder what it would be like if their mother, father, brother, or sister was sent away will relate to Esme's quiet strength and candor and will understand her worry about what could happen. This story has the potential to speak to readers on a personal level and to turn a concept that seems so hard to grasp--war--into one that feels much more personal.

▼▲
Alan Madison is the author of two picture books published by Anne Schwartz Books. After interviewing some kids whose father was away on a 100 day, 99 night military tour of duty, Alan was inspired to write this story. Alan works on Emeril Lagasse's shows on the Food Network.