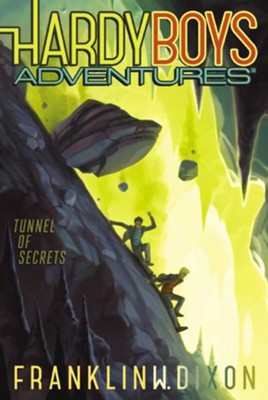 ▼▲
When a sinkhole opens up in the middle of town and swallows up one of Bayport's historic statues, the Hardy Boys suspect that something shady is at play. Joe and Frank discover an entire underground city that's been abandoned for years, but now that secret city is home to a cultish band of criminals who plan to take over Bayport. Can Frank and Joe thwart these crooked plans? Recommended for ages 9 to 12 years.

▼▲
When Frank and Joe set out to explore caves and tunnels, they dig themselves into some dark and dangerous trouble in this Hardy Boys adventure.

When a sinkhole opens up and swallows one of Bayport’s historic statues, Frank and Joe suspect something—or someone—shady at play. They jump at the chance to investigate; Joe as a member of an urban exploration club, and Frank as photographer for the school paper.

But in the thick of their search, the boys stumble upon an entire underground city that’s been abandoned for years. Now the city is home to a cultish band of criminals who plan to take over Bayport. Frank and Joe are determined to shut down the crooks, but after being barreled down by a boulder and nearly squashed by a runaway train, they have to wonder: are they in over their heads?

▼▲
I'm the author/artist and I want to review #10: Tunnel of Secrets.
Back
Back