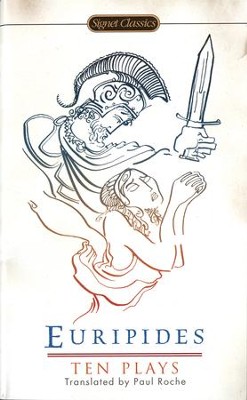 ▼▲
Of all the ancient Greek dramatists, Euripides says the most to modern readers. His principal themes - the oppression of women, the folly of war, and the tensions between freedom and order, faith and reason, dogma and fact - are as relevant today as they were centuries ago. His plays continue to shock, to inspire, and to remind us of what it truly means to be human.

▼▲
A modern translation exclusive to signet

From perhaps the greatest of the ancient Greek playwrights comes this collection of plays, including Alcestis, Hippolytus, Ion, Electra, Iphigenia at Aulis, Iphigenia Among the Taurians, Medea, The Bacchae, The Trojan Women, and The Cyclops.

▼▲
Euripides, the youngest of the three great Athenian playwrights, was born around 485 BC of a family of good standing. He first competed in the dramatic festivals in 455 BC, coming only third; his record of success in the tragic competitions is lower than that of either Aeschylus or Sophocles. There is a tradition that he was unpopular, even a recluse; we are told that he composed poetry in a cave by the sea, near Salamis. What is clear from contemporary evidence, however, is that audiences were fascinated by his innovative and often disturbing dramas. His work was controversial already in his lifetime, and he himself was regarded as a ’clever’ poet, associated with philosophers and other intellectuals. Towards the end of his life he went to live at the court of Archelaus, king of Macedon. It was during his time there that he wrote what many consider his greates work, the Bacchae. When news of his death reached Athens in early 406 BC, Sophocles appeared publicly in mourning for him. Euripides is thought to have written about ninety-two plays, of which seventeen tragedies and one satyr-play known to be his survive; the other play which is attributed to him, the Rhesus, may in fact be by a later hand.
Paul Roche, a distinguished English poet and translator, is the author of The Bible’s Greatest Stories. His other translations include Euripides: Ten Plays (Signet), Oedipus Plays of Sophocles (Meridian) and The Orestes Plays of Aeschylus (Meridian).

▼▲
I'm the author/artist and I want to review 10 Plays.
Back