We are OPEN and SHIPPING - click here for shipping estimates
PRE-SUMMER CYBER SALE EXTENDED thru 6/1 ~ Over 2,500 items up to 90% off
#10: Eyes on Jungle Doctor
By: Paul White 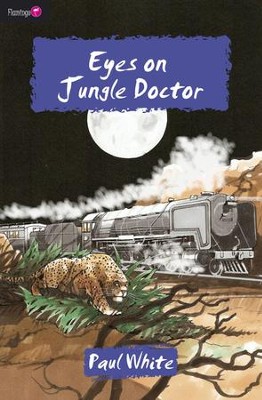 ▼▲
There are patients in the Mvumi hospital who have lived for years in 'Utitu'---The Land of Darkness. But the Jungle Doctor has strong medicine that can cure this blindness. However, Berenge, the witchdoctor, has his own brand of 'medicine'. This medicine doesn't cure blindness---it causes it. But he won't let a little thing like blindness stop him from get rich on other people's sufferings and he is not about to let his patients out of his clutches. Learn how Berenge's evil deeds are thwarted and how one patient finds light, not only for his eyes, but for his soul.

Ng'wagu who for years has lived in "Utitu" - "The Land of Darkness" - comes to the Jungle Hospital to see what Jungle Doctor could do for him with his "instruments of iron."

The story tells how his evil deeds at length were thwarted, and how Ng'wagu found light, not only for his eyes, but also for his soul.

Another thrilling adventure from Paul White based in Mvumi hospital, Tanzania.

▼▲
Paul White was an Australian missionary doctor in Africa who learnt to clothe his Bible teaching in fables, creating stories with a timeless quality. When he returned home to Australia his stories were discovered and published to world-wide acclaim.