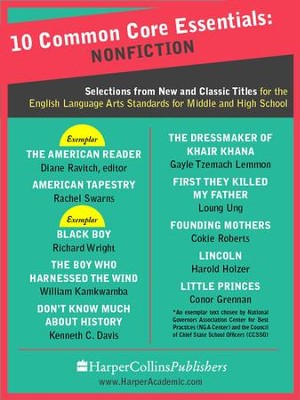 The excerpts featured in this free sampler come from some of our most popular nonfiction books for middle and high school classrooms—making them ideal choices to meet the new Common Core Standards for the English Language Arts. From the primary documents of The American Reader to The Boy Who Harnessed the Wind—the story of young man from an impoverished African village who built a windmill to bring life-changing electricity to his community—these books will take students across time periods and around the world. They'll grapple with complex ideas and meet people from the past and present who will inspire them. Along the way, your students will come to understand the components of critical thinking and good writing—and why they matter.

Diane Ravitch, a historian of education, is Research Professor at New York University, holds Brown Chair in Education Studies at the Brookings Institution, and is a Fellow at the Manhattan Institute. A former Guggenheim Fellow and recipient of many awards, she is also the author of the recent book Left Back: A Century of Failed School Reforms.

After volunteering at the Little Princes Children’s Home in the village of Godawari in 2004, Conor Grennan eventually returned to Nepal to launch Next Generation Nepal (NGN), a nonprofit organization dedicated to reconnecting trafficked children with their families. He resides in Connecticut with his wife and two children.

Rachel L. Swarns has been a reporter for the New York Times since 1995, reporting on domestic policy, the presidential campaigns of 2004 and 2008, the First Lady, and the modern American family. She has also worked for the New York Times in Russia, Cuba, and South Africa, where she served as the Johannesburg bureau chief. She lives in Washington, D.C.

Richard Wright won international renown for his powerful and visceral depiction of the black experience. He stands today alongside such African-American luminaries as Zora Neale Hurston, James Baldwin, and Toni Morrison, and two of his novels, Native Son and Black Boy, are required reading in high schools and colleges across the nation. He died in 1960.

William Kamkwamba is a New York Times bestselling author and innovator who designs development projects, including safe water delivery and educational access. William tells his journey of how he achieved his dream of bringing electricity, light, and the promise of a better life to his family and his village in his memoir The Boy Who Harnessed the Wind: Creating Currents of Electricity and Hope, co-authored with Bryan Mealer. Since its debut, The Boy Who Harnessed the Wind has sold more than 1 million copies and has been translated into nearly twenty languages worldwide. It has been published in two additional editions, a young reader’s version and a children’s book. After graduating from Dartmouth College in Environmental Studies, William began work as a Global Fellow for the design firm IDEO.org. He is an entrepreneur, TED Fellow, and has worked with the WiderNet Project to develop appropriate technologies curriculums focused on bridging the gap between “knowing” and “doing” for young people in Malawi and across the world. William splits his time between the U.S. and Malawi and is currently working full-time with the Moving Windmills Project to bring the Moving Windmills Innovation Center to life in Kasungu, Malawi.

Kenneth C. Davis is the New York Times bestselling author of A Nation Rising; America's Hidden History; and Don't Know Much About® History, which spent thirty-five consecutive weeks on the New York Times bestseller list, sold more than 1.7 million copies, and gave rise to his phenomenal Don't Know Much About® series for adults and children. A resident of New York City and Dorset, Vermont, Davis frequently appears on national television and radio and has been a commentator on NPR's All Things Considered. He blogs regularly at www.dontknowmuch.com.

Gayle Tzemach Lemmon is a Senior Fellow at the Council on Foreign Relations and a contributor to Atlantic Media’s Defense One, writing on national security and foreign policy issues. She is the bestselling author of The Dressmaker of Khair Khana and has written for Newsweek, the Financial Times, International Herald Tribune, Christian Science Monitor, CNN.com, and the Daily Beast, as well as for the World Bank and Harvard Business School.

Loung Ung was the National Spokesperson for the “Campaign for a Landmine Free World,” a program of the Vietnam Veterans of America Foundation, which was awarded the Nobel Peace Prize for co-founding the International Campaign to Ban Landmines. Ung lectures extensively, appears regularly in the media, and has made more than thirty trips back to Cambodia. She is also the author of Lucky Child: A Daughter of Cambodia Reunites with the Sister She Left Behind and LuLu in the Sky.

Cokie Roberts was a political commentator for ABC News and NPR. She won countless awards and in 2008 was named a “Living Legend” by the Library of Congress. She was the author of the New York Times bestsellers We Are Our Mothers’ Daughters, Founding Mothers, Ladies of Liberty, and, with her husband, the journalist Steven V. Roberts, From This Day Forward and Our Haggadah.

Harold Holzer, one of the country's leading authorities on Abraham Lincoln and the Civil War era, has more than forty books to his credit, including Father Abraham: Lincoln and His Sons and The President Is Shot!. He is a frequent guest on television, acted as a Content Consultant to the Steven Spielberg film Lincoln, and serves as chairman of the Lincoln Bicentennial Foundation. He lives in New York City.

▼▲
I'm the author/artist and I want to review 10 Common Core Essentials.
Back
Back