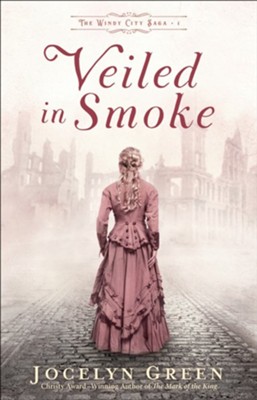 ▼▲
Meg and Sylvie Townsend manage the family bookshop and care for their father, Stephen, a veteran still suffering in mind and spirit from his time as a POW during the Civil War. But when the Great Fire sweeps through Chicago's business district, they lose much more than just their store.

The sisters become separated from their father and make a harrowing escape from the flames with the help of Chicago Tribune reporter Nate Pierce. Once the smoke clears away, they reunite with Stephen, only to learn soon after that their family friend was murdered on the night of the fire. Even more shocking, Stephen is charged with the crime and committed to the Cook County Insane Asylum.

Though homeless and suddenly unemployed, Meg must not only gather the pieces of her shattered life, but prove her father's innocence before the asylum truly drives him mad.

▼▲
Jocelyn Green is the award-winning and bestselling author of numerous fiction and nonfiction books, including The Mark of the King, A Refuge Assured, and Between Two Shores. Her books have garnered starred reviews from Booklist and Publishers Weekly and have been honored with the Christy Award and the Golden Scroll. Jocelyn lives with her family in Cedar Falls, Iowa. Visit her at www.jocelyngreen.com.

▼▲
I'm the author/artist and I want to review #1: Veiled in Smoke.
Back
Back