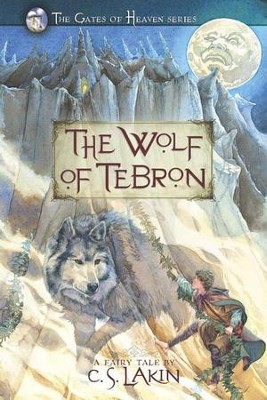 ▼▲
A young blacksmith must undertake a perilous journey to the four ends of the world to rescue his wife, who is held captive by the Moon. Along the way, he befriends a powerful wolf who encourages, protects, and ultimately sacrifices his life to save his human friend. A stirring allegory of God's love in classic fairy tale tradition.

In classic fairy tale style, we embark on an enchanted journey with a young blacksmith—Joran—whose only desire is to live a peaceful, uncomplicated life in his forest village, a desire shattered by the sudden and bizarre disappearance of his wife, Charris. Later, Joran is plagued by nightmares of an unimaginable sea, where Charris remains trapped in a sand castle at the whim of the Moon. The goose woman insists he will find no rest from his nightmares until he solves the riddle of three keys. She tells him to travel the treacherous journey to the house of the Moon to find the answers he seeks.

Unable to ignore the urgings of his nightmares, Joran sets out north seeking the Moon. Leaving a town and family where he never felt truly at home, Joran’s journey becomes more than just a search for his wife. His path also leads inward, for he must face emotions that have tormented him his entire life—feelings of alienation and anger, of despair and hurt. Along the way he rescues a wolf—a huge, imposing creature that becomes a companion, and eventually a trusted friend.

Joran has the uncanny ability to speak with animals, and learns from the wolf, Ruyah, that he can manipulate his dreams to affect the real world. With Ruyah’s humor and guidance, Joran finds the courage and fortitude to press on, despite setbacks and disappointments. With the wolf by his side he endures the darkness at the end of the world and the ravings of the lunatic Moon, who sends him off—more confused than before—to the Palace of the Sun with a seemingly useless gift.

After trekking through a vast, unmerciful desert, Joran arrives at the Palace of the Sun, where he meets the Sun’s mother, Sola. She helps Joran understand part of his riddle and then sends him, with the gift of a sunstone, to the cave of the South Wind, whom, she says, will finally reveal the truth to him about his wife—if he dares hear it. He and Ruyah travel south through jungle, and finally arrive at the cave. There Joran is swept along a vision where he sees his past, and in horror, learns truths that send him into deep despair. The South Wind dismisses him with one last gift—but like the other two gifts, he has no idea what they are for or how they will help him rescue his wife. She tells him to find the sea of his dreams—far west, beyond his imagining.

▼▲
C. S. Lakin comes from a family of successful writers. She grew up collating television scripts for her mother, a screenwriter, story editor, and producer for television. As an adult, Susanne assisted in developing series for television, and while raising two daughters and running a bed and breakfast inn in northern California, wrote her first three novels and a cookbook. In 2009, Susannes contemporary novel, Someone to Blame won the Zondervan First Novel contest at the Mount Hermon Christian Writers Conference. The novel will be published by Zondervan in August of 2010. She and her husband, Lee Miller, continue to live in California, where she currently works as a freelance copy editor and writing mentor.

All Joran wants is "to live a simple, peaceful life, raise a family, work with his hands." But his reality is shattered when his wife suddenly disappears in a burst of magic, and a mysterious, old lady--known as The Goose Woman--reveals that he must travel to the house of the Moon in order to free her. Instead of enjoying the simple life of a blacksmith, Joran finds himself embarking on a treacherous journey "looking for a tricky Moon, a wayward wife, and a sea he only knew from his dreams."

The Wolf of Tebron is C.S. Lakin's first novel in The Gates of Heaven series. It's written in classic fairytale style, where magic, fantasy, and the forces of good and evil abound. Rich in vibrant language, adventure, personification, and more, this allegory offers the reader more than just a thrilling story. As Lakin says, "Joran's journey inspires and encourages readers to focus on our deep purpose and meaning in life."

Joran, the main character, faces many outward obstacles during his quest, but we learn it is the battle within that must be faced and conquered in order for him to truly succeed. This is a point, I believe, that all of us can identify with and apply to our own lives. Ruyah, the wolf, is also a very important character; he becomes Joran's constant encourager and companion--a true friend who shows sacrificial love. As they travel together, the wolf extends much wisdom by quoting Scripture and many famous people, such as C.S. Lewis, G.K. Chesterton, T.S. Elliot, William Wordsworth, and more.

A discussion of The Wolf of Tebron is included at the end of the book. Lakin explains her motive for writing the book and including literary elements like allegory and metaphor. She also provides 15 thought-provoking questions designed for book club discussions, high school English classes, and the homeschool environment. As I was reading, I compiled a list of over 50 vocabulary words that I will add to these questions.

The novel itself is 246 pages long, and because of its profound and comprehensive themes, I will be waiting a couple of years to introduce it to my oldest, who is currently in sixth grade. Possibly, it would be a great read-aloud to a younger child who is mature for his/her age. Parents, though, may need to explain definitions of unfamiliar words and meanings of symbolic elements.

I really enjoyed reading The Wolf of Tebron and recommend it to teens and adults who love a good allegorical fairytale. For in-depth study, it would be great reading material for a high school English class. The website provides many links to stores where the book can be purchased for a decent, affordable price.

▼▲
I'm the author/artist and I want to review #1: The Wolf of Tebron - eBook.
Back
Back