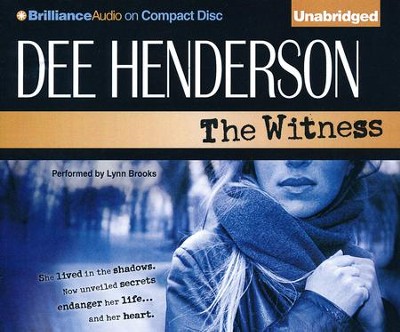 #1: The Witness - unabridged audiobook on CD

▼▲
Eight years ago, Amanda Griffin witnessed a horrific crime, and she's been running ever since. Her sisters believe she's dead. But recently exposed family secrets have placed Amanda's siblings in the spotlight---and in peril. Can Amanda protect them without exposing herself? And does pressing danger mean police chief Luke Granger is running out of time?

"I know the family secret."

Amanda Griffin is on the run. Eight years ago she disappeared after witnessing a terrible crime. Now her family thinks she’s dead, but she’s back in town…desperate to find a way to protect the ones she loves.

Police Chief Luke Granger is determined to find out who is behind the threats against Amanda and her sisters. With danger pressing in, there isn’t much time, and Luke must put everything on the line.

Chief Granger and homicide detectives Connor and Marsh will do whatever it takes to stand in harm’s way for the sake of the three Griffin women. It’s no longer professional—it’s personal. But chances are that at least one of them will fail…. And it’s going to take a faith deeper than any of them currently knows to stand and confront the danger still to come.

“Few Christian novelists are currently as hot as Dee Henderson, who is burning up CBA bestseller charts with two different series and earning a reputation for her action-packed stories of suspense, romance, and courage.” —Publishers Weekly

“The name Dee Henderson is synonymous with authenticity. Her books shine with believable facts and descriptions while her characters think and act like the professionals they are.” —Romantic Times Magazine

▼▲
Dee Henderson is the author of fourteen best-selling novels, including the acclaimed O’Malley series and the Uncommon Heroes series. As a leader in the inspirational romantic suspense category, her books have won or been nominated for several prestigious industry awards including the RWA’s RITA Award, the Christy Award, the ECPA Gold Medallion, the Holt Medallion, the National Readers’ Choice Award, and the Golden Quill. Dee is a lifelong resident of Illinois and is active online. Visit her at www.deehenderson.com.

▼▲
I'm the author/artist and I want to review #1: The Witness - unabridged audiobook on CD.
Back
Back